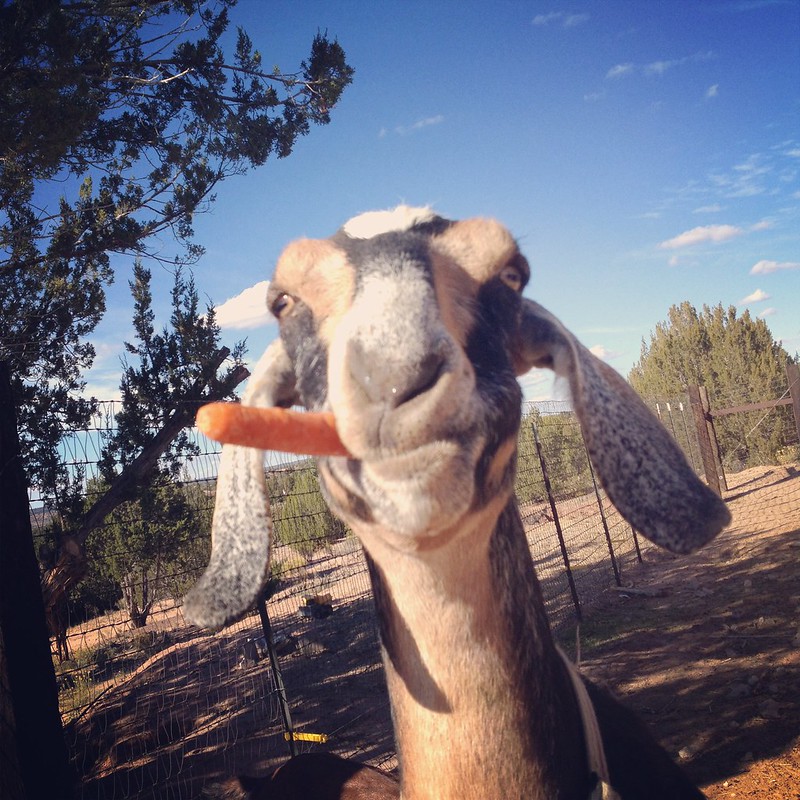 I’ve been avoiding this blog… you may have noticed, but it’s time to continue telling our stories.

We lost Ace a couple weeks ago. It was only 3 weeks after she’d had 4 babies! I was so proud of her! I had the ‘kidding’ post planned in my brain, but now it has to wait. That story will be told as well, but I just needed to tell this one first.

One of our goats, I believe it was Leroy, because it never happened before he came, figured out how to open the door to the feed side of the barn. I had chased them out of there at least twice before. We turned the dead bold on the door around and started locking it from the outside so that they couldn’t get the door open. However, one Thursday a couple weeks ago, they had gotten in again. Apparently, I forgot to turn the bolt when I left the barn after milking that morning. This time, they didn’t just help themselves to an all you can eat buffet of alfalfa, they got the lids off of the feed bins that have the grain and the chicken feed in them. That was a problem.

Goats can easily eat themselves to death because they have such a greedy appetite. Foods like grain, that are fine in small quantities can cause major issues if they gorge on it. And gorge they did. I didn’t even find the door was open until they were all completely full and done with whatever was in there. Chicken feed especially is not good for goats to eat.

I had no idea how much any of them had eaten, so just hoped for the best and shut the barn door. They all acted as normal as could be for the rest of that day, but by the next morning I knew we had a problem.

No one was standing at the gate begging for breakfast that morning when I went up. Ace, Myrtle and Sere were all very lethargic and obviously bloated. I called some friends who keep goats for some advice, and I got online and read as quickly as I could what to do. Some friends and neighbors came over and helped me keep them on their feet, and drench them with vegetable oil and baking soda. It was an interesting few hours. Sere had horrible diarrhea and I was concerned about her babies since we didn’t know when she was due. Ace seemed rather to have the opposite problem and kept trying to poop, but nothing would happen. Myrtle fell somewhere in the middle, and Luna, fortunately did not get into the grain bins, it seems, because she was perfectly happy and normal.

The goats seemed to improve somewhat over the next 24 hours, but I kept an eye on them and tried to keep them moving as much as possible. That afternoon I went with Stuart and some students on a hike in a canyon near us, it’s a lovely place! I’ll share it with you sometime. When we got home that evening I went up to take care of the goats and lock up the babies and I found Ace in the barn and she was gone. Her little ones, who’d not been getting much milk over the last day and a half were still trying to nurse on her. It was a very sad moment.

Stuart and his dad quickly dug a grave and our brave boys helped out the whole time. Our second son was very sad through the whole process. He sat and talked with me as I attempted to get at least a few swallows of milk into the orphaned babies with a bottle. And he was sad for the babies because they would “miss their mom.” We had some good talks about how things like this happen sometimes when you keep animals, and that we were going to be brave and help keep the babies alive by feeding them with bottles, and even though they would miss their mom and we were sad that she was gone, it was all going to be ok.

The next morning there was more bad news. Sere had gone into premature labor and her twins were born too early to survive. She was a very sad goat for a few days, but thankfully she and Myrtle have completely recovered from the whole experience.

Live and learn is the way it goes on the farmstead. It was a pricy lesson to learn this time around. Ace was our best milker, and my favorite. But she left us with two beautiful baby girls who will now stay here and fill her place. I’ve secured the lids of the grain bins better now, and bought a second bolt for the barn door. You can’t always predict what will happen, and have to roll with the punches when they come.

So it’s hard for me to think about Ace and how needless her death was, but I’m still thankful for the lessons that she taught me through the whole time we had her.