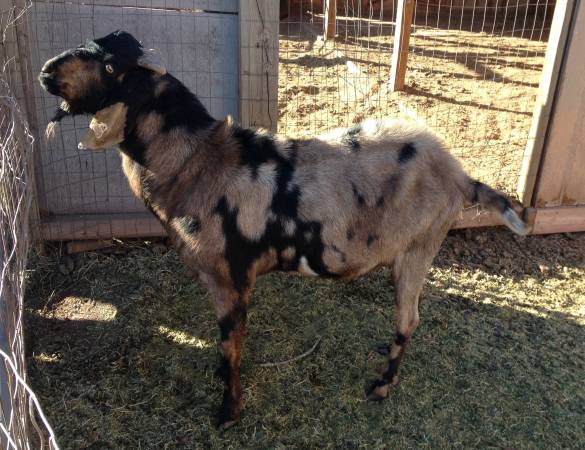 There’s a new man on the Ranch these days! 🙂 Actually he’s been here for a couple of months now and I’m hoping has already gotten his job done. 😉

You probably read about the unfortunate incident with the Buck we borrowed from some friends who became mysteriously ill and didn’t make it. He hung out with our girls for about a week and a half before he had to go home, but we were uncertain if he managed to make any babies in that time.

We started looking into some studding services that we discovered not too far from us. But in order to do that, they required blood testing for the goats to make sure they didn’t carry the dreaded caprine diseases that no one wants. And that’s totally understandable. But the issue was that there was still the slight possibility that some of them could be pregnant already. So I called some of the testing labs about pregnancy tests for the goats as well. THAT was an ordeal in and of itself!! One lab I called would do one of the disease tests and the pregnancy test. The other lab would do both of the disease tests but not the pregnancy test. It was becoming confusing.

Still I was willing to give it a shot and ordered a blood draw kit. It arrived and after watching several youtube videos about how to draw blood from goats, Stuart and I decided to give it a go. It was NOT easy. Myrtle was the most patient goat, I just love her! But I tried a couple of times and nothing was working so we called it a day.

I was so frustrated because our girls were drying up and now we had no way of making sure they were bred and the typical breeding season was quickly passing. That evening after the failed blood draw attempt I got on craigslist and started looking for a buck. Low and Behold, I found Leroy! 🙂

I started communicating with the owner who assured me that he was a gentle buck, a requirement for living on our ranch, and that he made beautiful babies! 🙂 She was willing to let him come home with us for $75 (it can be difficult to find homes for the boys). When I figured out what it was going to cost us in money, never mind time and effort, to get our gals to the point where we could use the stud it was going to be WAY more than that. I figure having one extra mouth to feed was worth the investment if we can get some babies out of it all in the end. 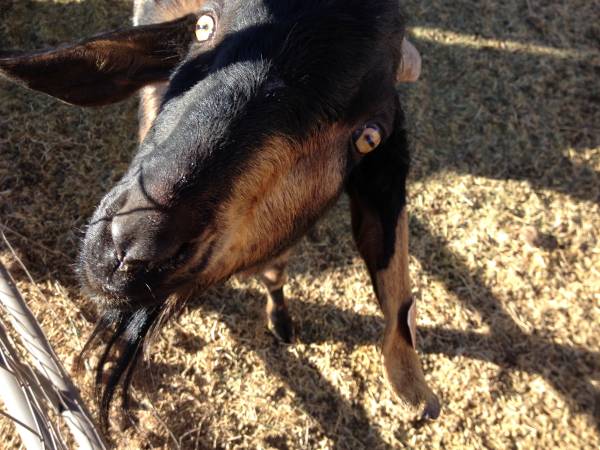 Common, Leroy, do your thing! 😉

Leroy is a pretty placid fellow for sure. He has little stunted horns, but they aren’t intimidating by any stretch, and he’s really a pretty nice fellow. I still try not to touch him because he does have that overpowering buckly aroma. (hurk!!) The gals have all gotten used to having him in the herd and my fingers are crossed that they all are or shortly will be expecting!! The earliest we could possibly have babies would be mid-late March and that was only if something happened with the first buck who came over!

Whew! I never imagined that breeding goats would end up being so complicated! I’ve realized finally that for an honestly sustainable operation you simply have to have your own breeding animals. It’s just the way it works. 🙂

We haven’t made up our minds about how Leroy will fit in our Ranch long term. He may go on to find a home elsewhere once we’ve got babies on the ranch. A buck really needs his own “pad” to hang out in so you don’t end up with unplanned breeding. So… I’ve got some ideas about where he’d be comfy and Stuart and I will talk through what we think is best. For now he’s here and he’s doing great! Maybe having an extra body in the barn keeps things warmer too! 🙂