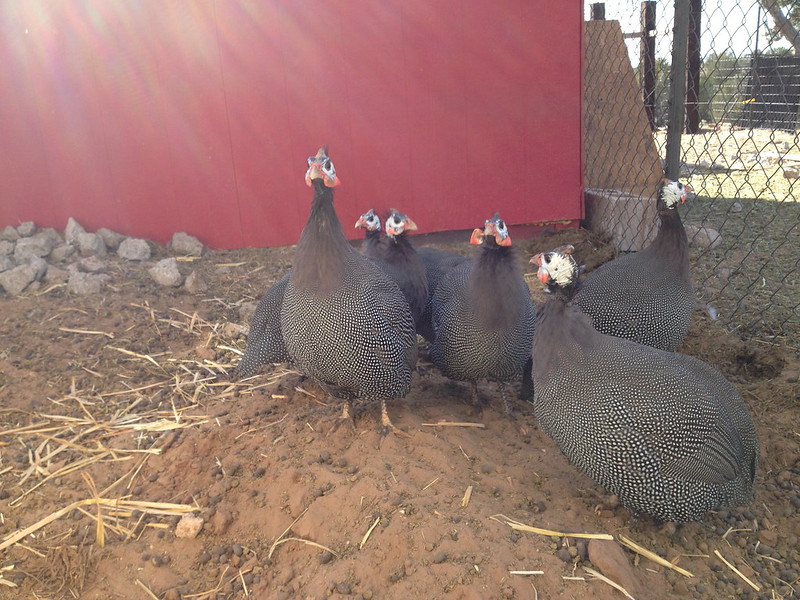 So I haven’t completely made up my mind about Guinea Fowl. 😉 We bought them initially because we’d heard/read that they are great at keeping down vermin, snakes and bugs! That sounds great to me! Especially the snakes part!

It was later in the “chick” season when I started looking for guinea keets but I did find a feed store that had some yay!! When I got there they told me they were buy one get 3 free!! Guess they were sick of having guineas. Ha! Turns out it’s good that they were cheap! I gave 10 to a friend and we kept 15. She lost about 6 of hers to cats and then we lost 8 of ours to Thor when we moved all the birds to the barn. It was not a nice time.

Our friend’s guineas also left and just didn’t come back when they finally let them out to free range. One eventually did return, but that’s the only guinea they have from their original 10.

We still have our 6 birds, and when they were in the barn they stayed in the chicken run because I’d put netting over the top. Now that the run has moved, there is no way to net the top and the Guineas (and some of the chickens too) can fly over the 6 foot fence. The chickens seem somewhat more intelligent than the guineas, however, and can usually make their way back in to roost for the night. 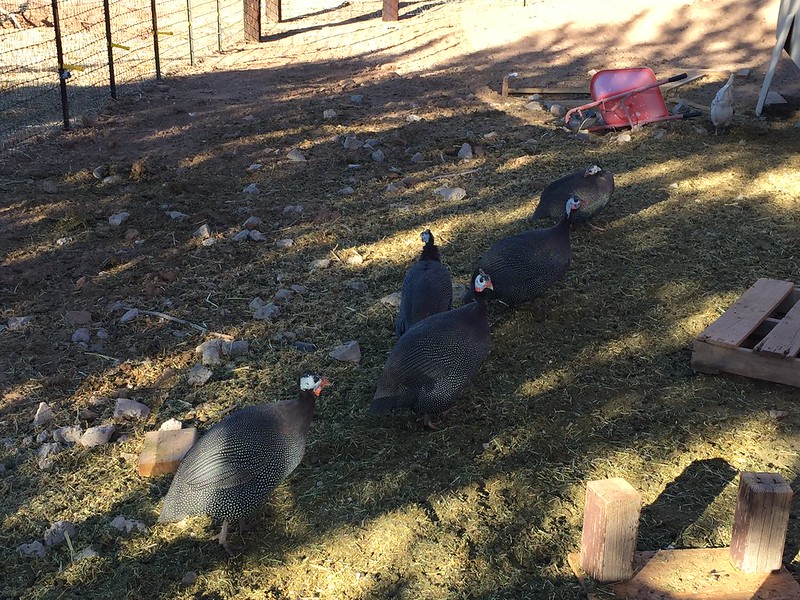 Our Guineas though have been flying out of the chicken run, out of the barn yard and then spending the day running back and forth along the fence trying to figure out how to get back in. They are so amazingly smart that they run at the fence over and over and of course get their tiny little head through but not the rest of them. 😉 Silly birds!

Recently they have been doing better about getting themselves back into the run/coop in the evenings so I’m starting to hope that they might make themselves useful after all. Just a few days ago they started to forage away from the barnyard fence a bit. I know it’s not as safe for them out away from there, but I can’t keep them in and I do want them to do their “job” in a sense so we’ll just have to see how it goes.

One thing about Guineas is they are great watchdogs. In fact even better than dogs to be honest. The ruckus that they create whenever anything is “different” in their environment is quite amazing! I think it’s most likely the reason why most people don’t keep guineas. 🙂

So for now I’m enjoying the diversity that they bring to our little ranch, and hope that they’ll stick around and be useful in keeping down the unpleasant things. I hope they don’t end up as coyote food too, but I’m not going to stress out about them. They have started to act a little more “settled” and able to get back to the coop when they’ve a mind and out and about when they like as well.