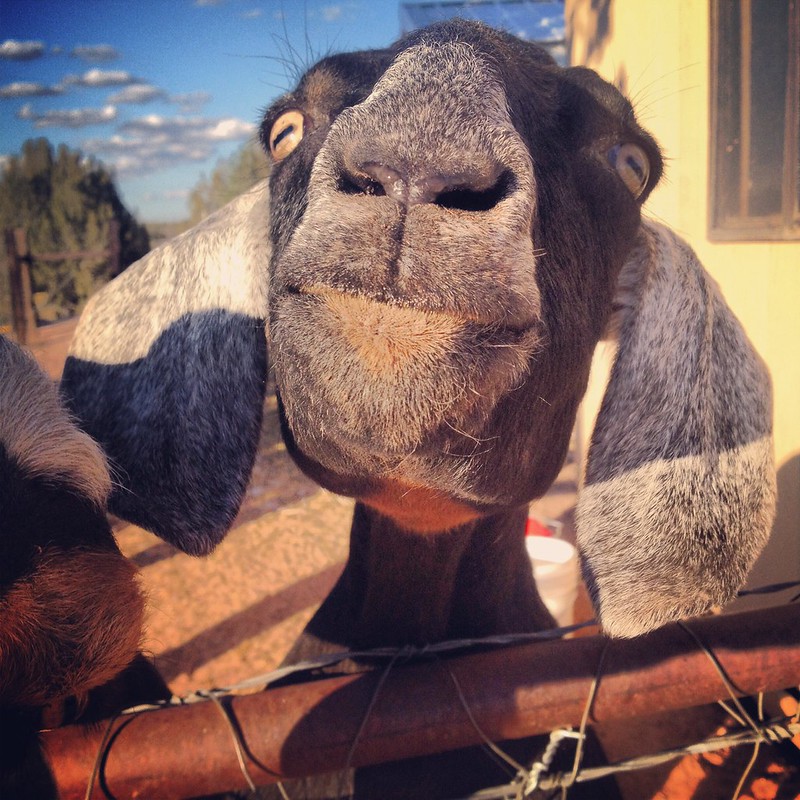 Her name is Moonlight Serenade but for short it’s Sere. 😉 She is a registered mini-Nubian. We obtained her by trading Polka and Polly for her. I originally wanted to sell those two and just have our herd of 3 girls, Luna being the baby wouldn’t be bred till next year. BUT no one seemed inclined to put down any money for them so when the opportunity came to get another larger doe and get rid of the 2 smaller ones, I took it!

Sere comes from good milk lines so I’m hoping that she will be a great asset to our herd. She’s a pretty gal. She was, apparently, Boss where she came from so adding her to our herd where Ace had set herself up as Boss has been very interesting. And watching the dispositions of goats play out is so entertaining.

Myrtle, for example, is a very docile, mild mannered soul who has no ambition to be the Queen of the herd. So when we brought her in, she stood on the outside of things for awhile till everyone accepted her. I even had to feed her in a different location than the others cause they wouldn’t let her eat! Even the goats that were less than half her size bullied her! Ha!

But Sere came in ready to take over the herd, so she did not wait to be invited in to any circles.
Everyone started out fine, just sniffing around and figuring stuff out. 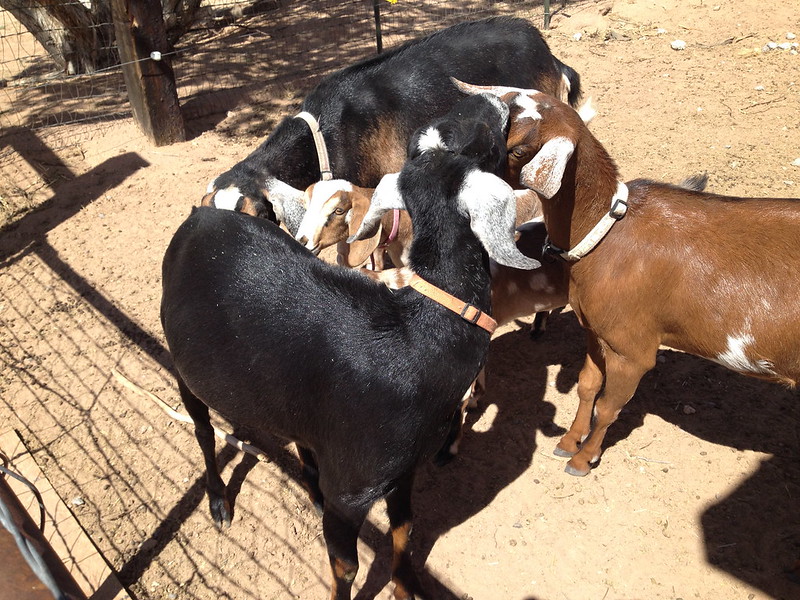 Who is this dashing dark new comer? 😉 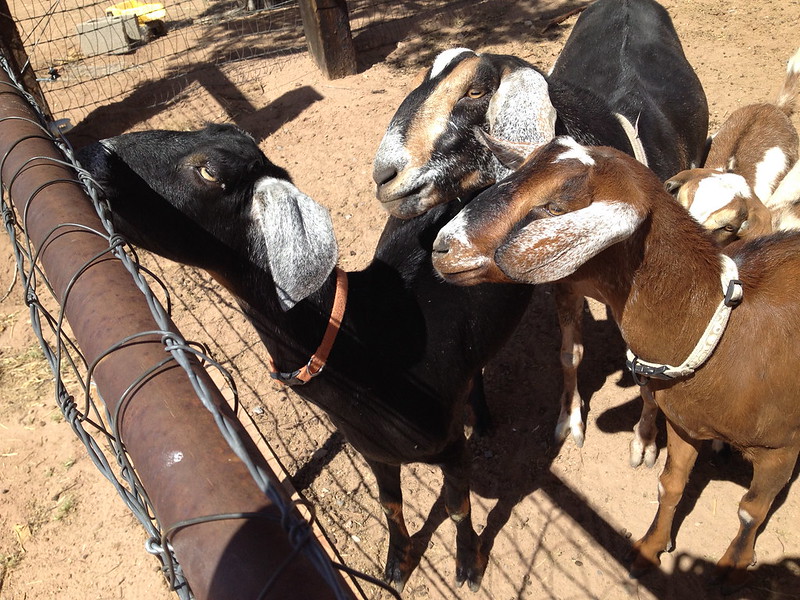 Right away the two young goats just left her alone, and Myrtle made herself scarce as well, but Ace was NOT about to let this new goat usurp her position! 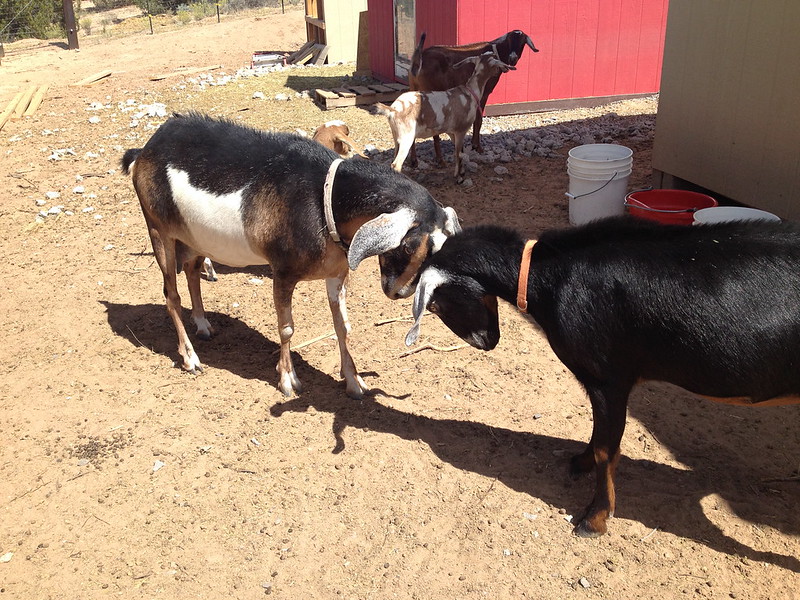 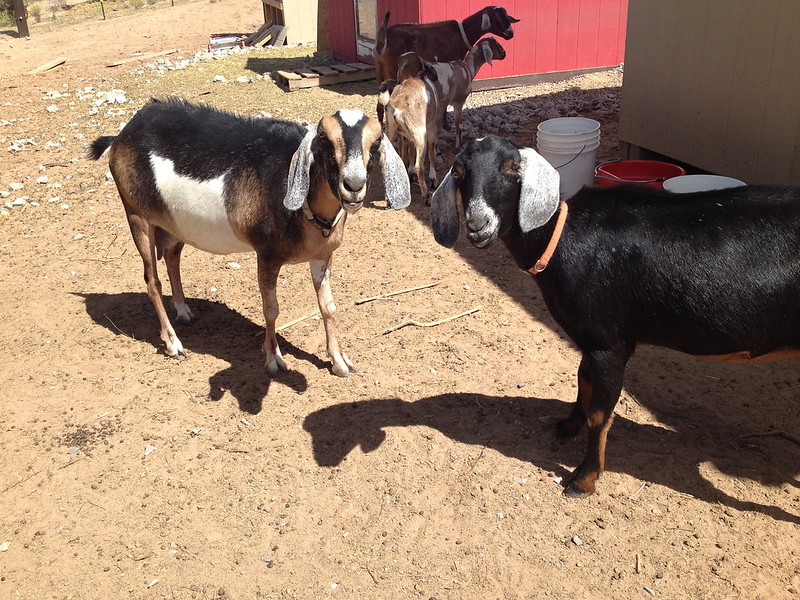 As you can see from the photos, even though Sere is a mini-Nubian, she’s still a good sized goat. I have no doubt that she’ll do fine with a regular sized Buck. I was concerned at first that she’d be too small which is what I was trying to avoid by getting rid of the Nigerian Dwarf goats. She is at least as tall as Myrtle though.

She and Ace are still not the best of friends, but Ace has determined that she is still the Boss-lady around here. 😉 Except for me, of course. So Ace butts Sere, Sere butts Myrtle, and Myrtle butts the little ones. Oh dear! So much like siblings it’s unreal!

Anyway, we are excited about the addition to our herd. She has not had kids yet so this year will be her first time and we’ll see how she does with milk though you really can’t judge their production till their second or third freshening. But I’m looking forward to it. 🙂 Never a dull moment in the ranching life!