Birds and Bees… or Bucks and Does 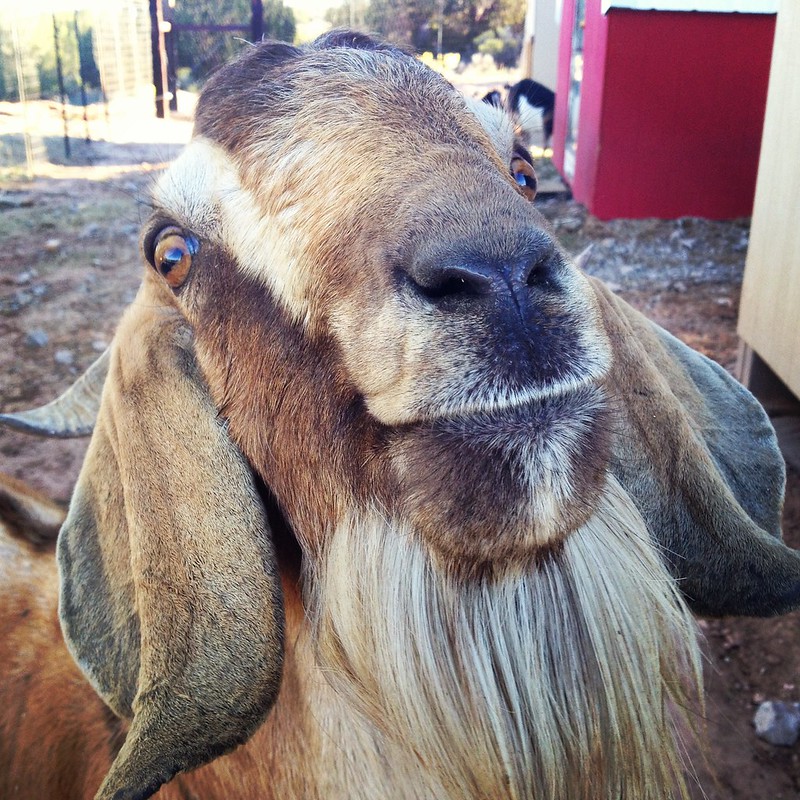 A few weeks ago our friends generously brought over their Nubian Buck to spent some time with our ladies! 😉 My kids called him “The Stinky Goat” and yes, every time I walked to the barn I remembered one of the biggest reasons why we didn’t want a buck!

He was a good natured guy though and even though he had horns, I only had to firmly remind him that I was the boss once and it was very minor. He was a mellow personality, which is so nice in a male critter! 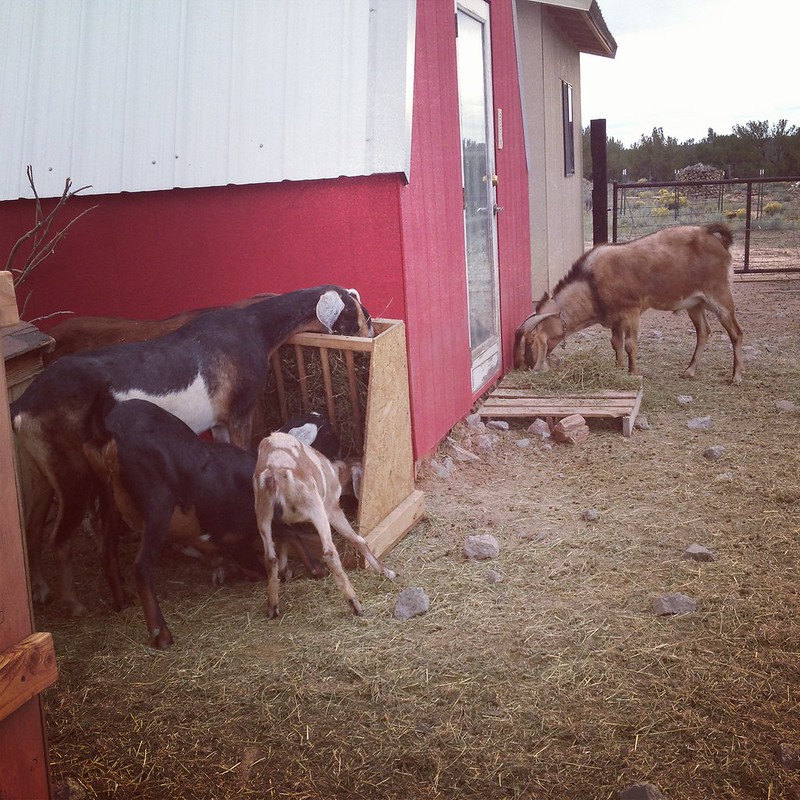 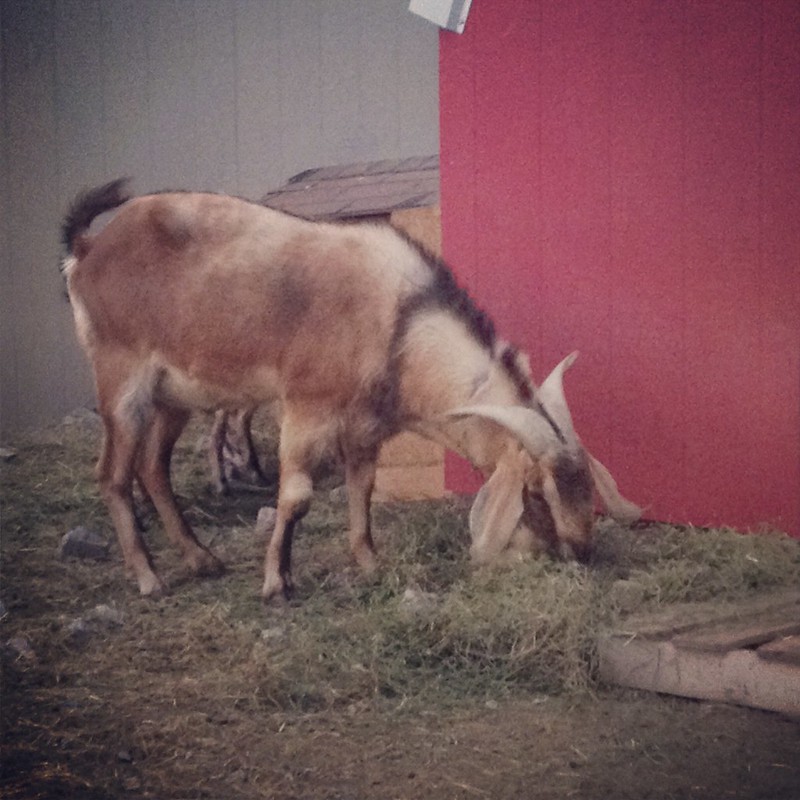 The girls didn’t really want anything to do with him though he was eager to make friends. He kept applying his “manly” cologne (hurk) but they stayed away from him for the first little bit. One morning I caught Myrtle having breakfast with him though so that was progress! His charms were working perhaps? 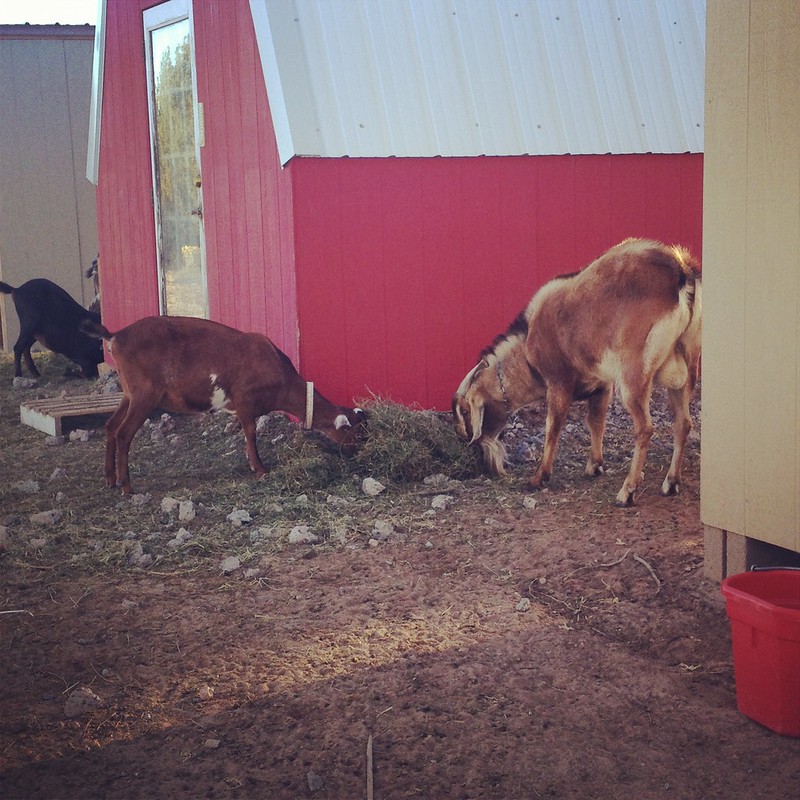 The goats, despite Stuart’s best efforts claimed the unfinished coop to sleep in. I suppose it’s fair considering the chickens are sleeping in the goat’s barn space! 😉 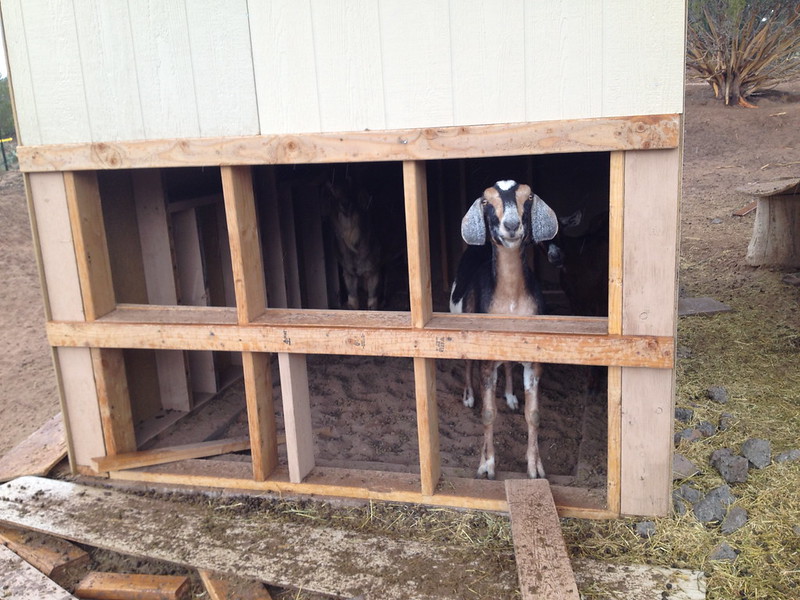 Eventually the girls accepted that Comet was just going to be there and they actually picked up some new habits from him… like standing on the gate. 😉

The Stinky Goat was at our place for about a week and a half when I went up to feed the goats one morning and he was in the coop and refused to come out. Even for food! This is not normal and it’s not usually a good sign when animals go “off their feed.” His owners were coming over that day for a birthday party anyway, so I figured I’d get their advice on him.

By the time they came he had come out of the coop and was standing around in the barn yard, so that seemed positive. They didn’t have any real ideas of what might be wrong. He was clearly not bloated, eyes were clear, but he wouldn’t “talk” he just made a small whimpering sound.

When they came back that night they thought he was somewhat improved even though he still wouldn’t eat. No one was overly concerned though I wasn’t very comfortable with the whole situation. Still I couldn’t imagine what could have possibly changed with him over night. 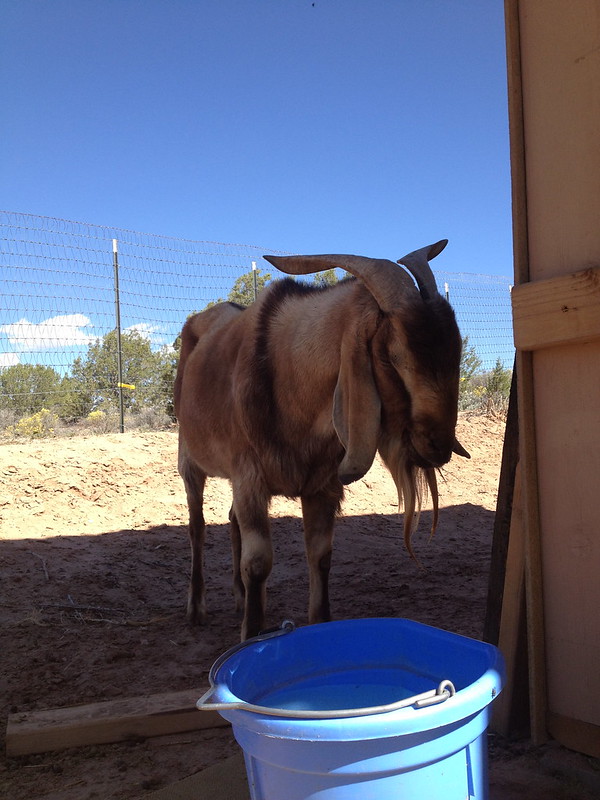 The next day he was still not well. We made sure he moved around a little, but by afternoon he was down. I pulled him up and made him walk some. I was really concerned about dehydration so I took him some apple cider vinegar water and he actually took a couple small sips. I could tell he wasn’t doing well though and it’s not fun at all to watch an animal suffer. 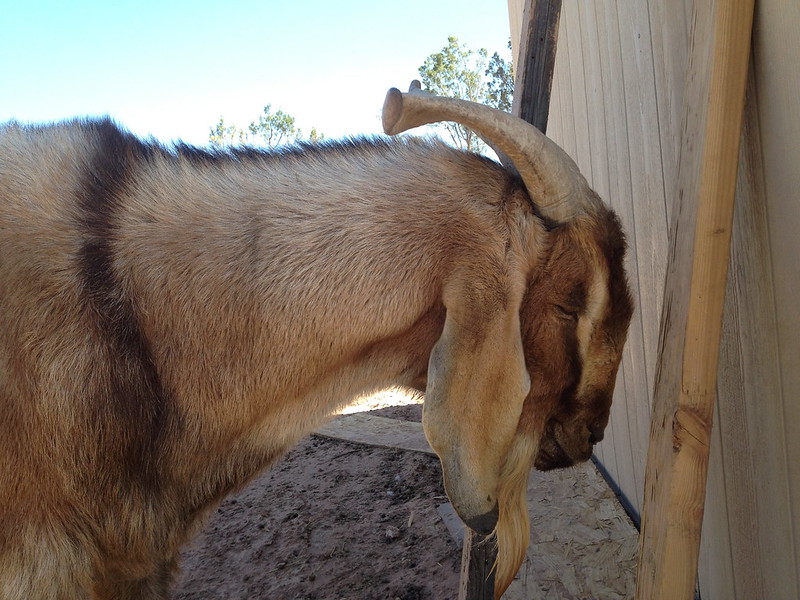 That evening I saw him standing in the coop from the kitchen window while I made dinner. After dinner we were going to have a family movie night and make popcorn, but I wanted to check the goat again first.

I went to the coop and he was down again, foaming from the mouth some and had really labored breathing. Not. Good. I called his owners and they came right over. None of us had any insight or any answers whatsoever. In my mind I kept thinking pneumonia, but his lungs weren’t rattling. We thought perhaps poisoning, but he was eating the same hay as everyone else and had been for over a week, so that seemed unlikely. He had no injuries or bites of any kind that we could find, so it was a complete mystery.

They loaded him in the truck and took him home, but he didn’t make it through the night. I feel absolutely terrible that this happened on my watch! They are completely understanding and don’t cast blame on us in any way, which is so nice! Fortunately they have a young buckling who will be able to be their new herd sire.

Both families kept a look out on the rest of our goats to see if anyone else became mysteriously ill but so far it seems to have been an isolated event. It’s frustrating to not know what happened or what could possibly have caused such a fast decline. He was eating and acting as normal as could be on Friday night, and by Sunday night he had died. So very sad.

Live and learn these lessons on this Ranching dream of ours. I’ve since become convinced that we will need our own buck. So that’s something to plan for in the future. Mr. Stinky Goat will need to have a residence here on our little homestead as well.

Till then though, I have to figure out a back up plan for getting our goats bred….