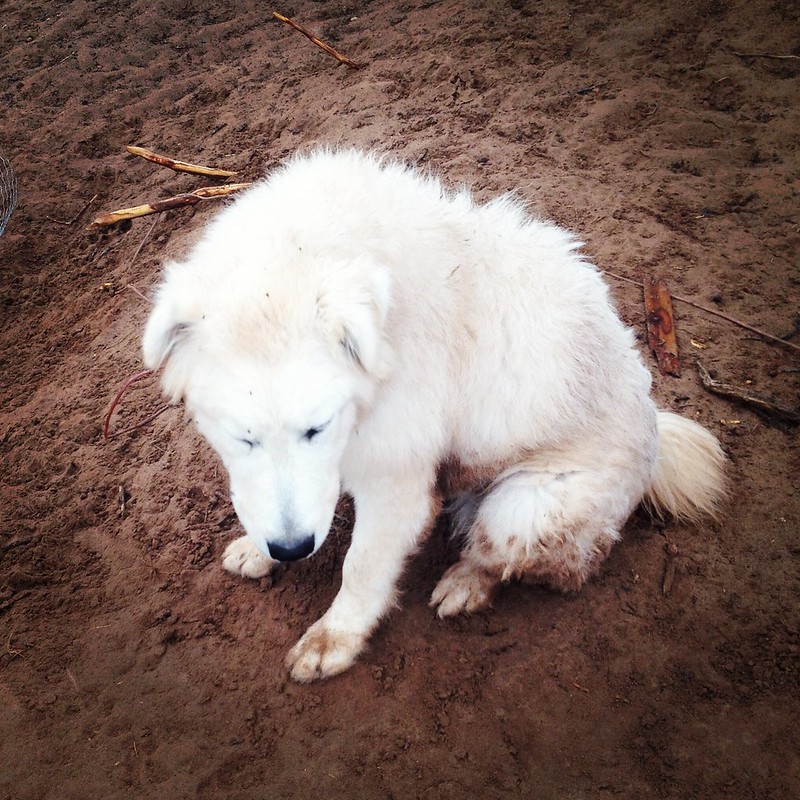 Life on the ranch was not all sunbeams and dewdrops last week sadly. I’m still trying to recover from it, honestly.

What happened is pretty sad, and I feel completely responsible, which doesn’t make it any easier to deal with. I worked really hard to get the barn modified for the chickens and guineas to stay up there since the coyotes had discovered our flock and were helping themselves to a chicken a day it seemed. I moved the birds one evening, and all seemed to be well for a few days. I was feeling good about the safety of our flock.

A few days into the adjustment period and I went up to the barn and noticed Thor in the yard busily munching something. I didn’t pay attention at first because he chews tree roots and odd whatevers he can find. I grew suspicious after a bit though because he was so intent on it. So I went over to find that it was all that remained of one of our guineas. 🙁 I was upset about that. I figured the bird somehow flew out and was chased to death by Thor and then happily devoured. I checked over the pen and couldn’t figure out how the bird got out so I hoped it was a one time event.

However, Thor got a taste for guinea and he liked it. The next day things were fine all morning and most of the afternoon. I made my customary afternoon trip up to the barn to check water buckets and look for eggs around 2:30. Later Stuart came home and he and I headed back up to the barn around 4:45. I noticed right away that some chickens were walking around in the yard and was irritated that they’d somehow managed to get out. What I found when I got to the chicken fence however was that Thor had dug under and was at that very moment happily causing havoc in the barn! We caught him red handed!

He came out and was immediately disciplined by Stuart while I assessed the damage. At first I thought they were all doomed. There were birds down everywhere! Once I was able to make sense of the chaos of overturned buckets and nesting boxes and stirred up straw and feathers, I discovered 8 of the remaining 14 guineas had been killed, 2 were alive in the barn and the other 4 were missing. Two of our Easter Egger layers were lying traumatized and panting on the ground, one later died, the other, happily is making a good recovery. She was very stressed, and has been hiding under the nesting boxes, but she’s making progress every day! 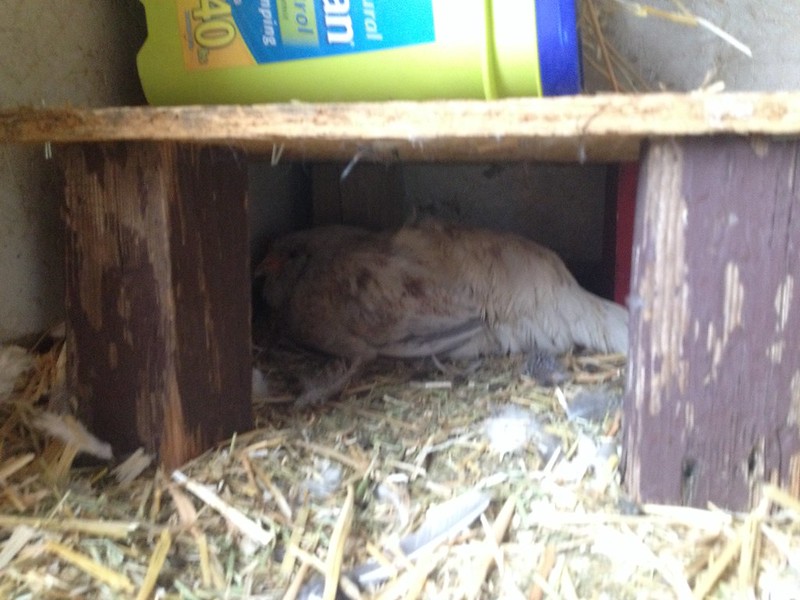 I worked for the rest of the evening trying to restore order to the barn yard. Every animal was stressed from the goats who were witnesses to the massacre to the birds that had escaped and were running around the yard.

Ace had a serious vendetta against Thor and repeatedly butted him, even when we tried to intervene! Stuart had to lock him in the milking side of the barn because we were afraid she would kill him if she didn’t stop! She knew that he had been behaving badly and was letting him know in no uncertain terms that it was NOT okay. I was happy to let that play out a little bit, because Thor needs to know his place. We made sure that he didn’t get hurt, but he definitely has a respect for Ace. I wonder what would have happened if she’d been able to get to him while he was in the middle of his spree. 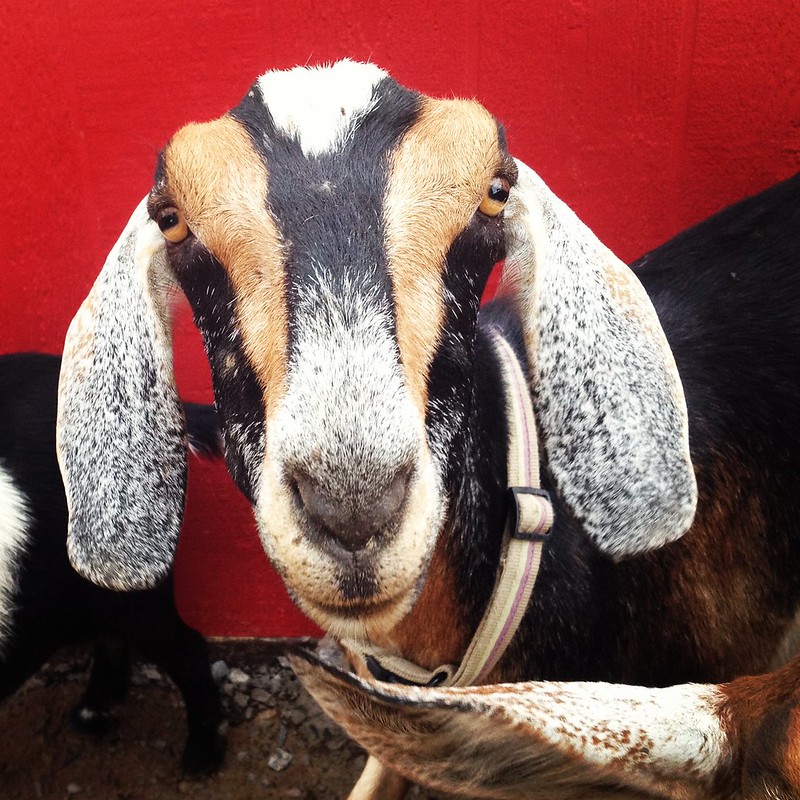 Eventually I saw 2 of the missing guineas in a tree near the barn. They came down on their own and were pretty easy to catch as they were trying to join their comrades in the barn. I walked around the fence looking in the trees for the other two but couldn’t locate them at all. Fortunately they came back at dusk on their own too. The pullets that had escaped from the barnyard I found in the old coop and transferred back to the barn. I filled in the hole and tied Thor to his dog house where he has been ever since.

We are down to 13 chickens, of course both roosters survived, and 6 guineas. I was so sickened by it all after it happened, that I nearly wanted to wash my hands of the whole thing! 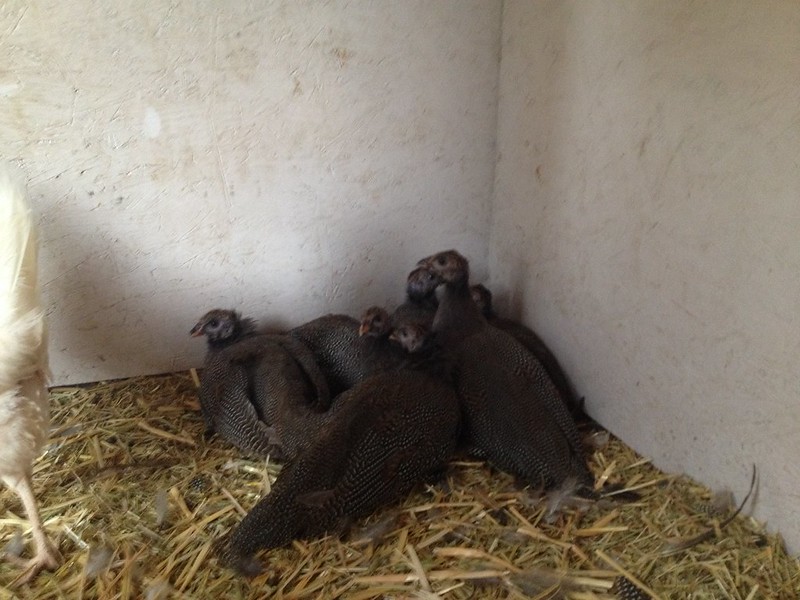 I know that having a good LGD takes time and training. Many people will not leave the dog with the stock unattended till they are 2 years old! We are learning as we go, and while Thor had been with the goats and doing fine, since the goats are more than capable of keeping him in check, I never should have left him unattended with the birds up there. Thinking that a fence, which he has dug under several times before, would be enough of a barrier was a mistake on my part. I take full responsibility for what happened.

My hope now is to start working with Thor slowly. I’ll be keeping him on his leash at all times unless I am up there. I plan to use several tried and true training methods on him including a modified collar that won’t let him get through if he digs, and a “dangle stick” which is used to teach dogs not to chase stock. I’m hoping and praying that with work we can break him of this. My fear is that since he got a “taste” of poultry he’ll always want to do it again. Hopefully his protective instincts and the training we give him will overcome that. All we can do is try.

No one said that this adventure would be easy. Animals and nature are unpredictable, and we are novices learning as we go. Stuart was so supportive and told me that it was “Just another day in paradise” and while it felt more like a day out of pandemonium instead, I know he’s right. We just have to keep going each day, and try to make things better, and eventually it will be!