As I mentioned in my butter post, we got a cream separator. In part because my ultimate goal is to make all of the dairy products we use. Butter, cream cheese, whipped cream and the like need… well… cream. And it’s hard to get cream from goat milk unless you have a separator.

So we found the best deal we could on one that will hopefully last a lifetime! We chose the manual option because we figured it could still be used in a case where electricity wasn’t an option, AND maybe it’s life expectancy would be longer?? Anyway, that’s the one we got.

Here is the one and only photo I got of the process because… You’ll see! 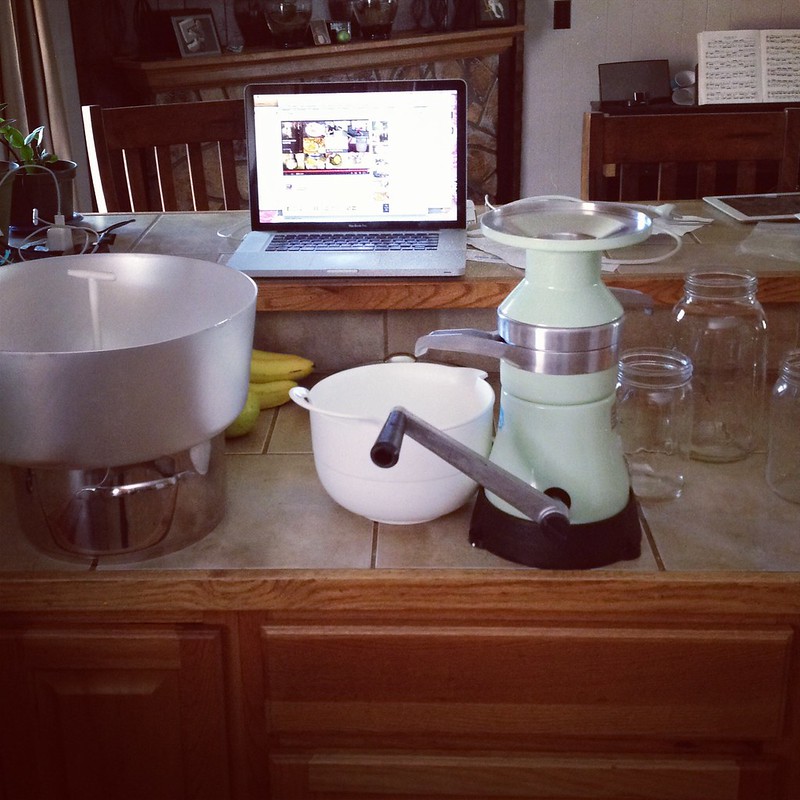 I had my laptop set up with the youtube video I found about the process because sadly the manual that comes with the separator (from Austria!) isn’t very detailed, or explanatory, so I needed some help. And even with watching the video there are some things I discovered for myself.

One: Mount that base on some wide board to get better leverage! Once I started cranking that thing it was WORK to hold it steady and I had cream and milk spurting out all over the counter top!!

Two: It’s a (at least) two person job! From the above statement you might have figured that holding it steady, cranking the handle, AND positioning the containers requires more than 2 hands. It was a mess!

Three: Make sure you have enough containers to hold all the skim milk and the cream! That might be a no brainer, but I had a hard time finding some that would fit under the spouts so then I was faced with the daunting task of swapping/dumping some of them in the middle of the process which meant that one or more hands wasn’t cranking or holding the base steady… which meant more mess!!

Ultimately it was a successful project, I ended up with a little over a quart and a half of cream, and then rest of the skim milk I used for cheese! But I had a lot of cleaning up to do after the fact, so if you ever decide to do cream separating, having a person, or two, help isn’t a bad idea. 😉

A couple things to keep in mind.

Warm Milk! If you try this with cold milk, you will get butter… all over the insides and the 11 or so disks in the separator. Make sure it’s around 100 degrees!

Set the hopper with the milk in it over a different bowl rather than on the separator before it gets up to speed otherwise you can overload the system before it starts spinning and blah… mess!

After all the milk has gone through poor a little bit of the skim milk back through just to “flush” any cream that might be lurking in there out.

Have a sink of warm soapy water ready to put all the little parts in when you are through. It is a lot of pieces, but there’s not much to cleaning them up.