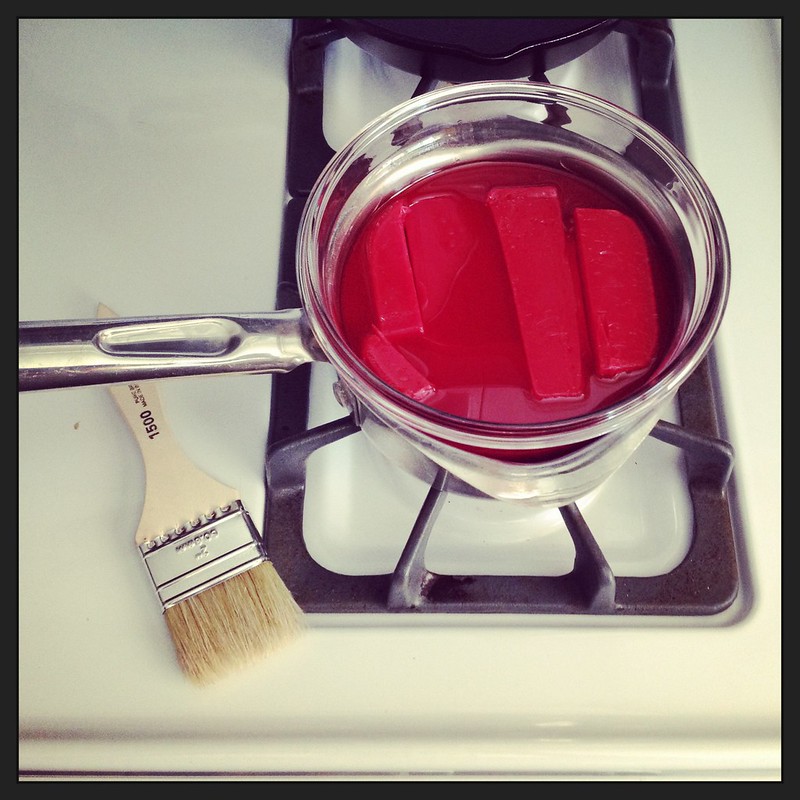 I’ve heard a couple different, and contradictory, opinions about how to store cheese during aging. Like I’ve said, it’s awesome that we “new” homesteader, farmer types can find all kinds of information online to help fill in the gaps in the lifestyle we weren’t grown in. But it can be confusing too.

I know that I’ve read you need to use cheese wax on the cheeses to have a barrier for bad bacteria and mold while your cheese still has a “breathable” way to get rid of excess moisture while it ages. Made sense to me… I guess. So I bought a couple pounds of cheese wax! It’s a fun bendy kind of wax that is also reusable!! I had my father-in-law hunt down a natural bristle paint brush to use for applying the wax. People recommended having a designated “wax pot” to use for the wax since cleaning it off/out of things is difficult. I can attest to that last part anyway! I didn’t have any pots that were big enough for dipping the cheese, so I opted to use one of my glass snapware things to be the wax container. I can heat it double boiler style over a little pan and then when it’s cool just pop the top on and keep it in the cabinet. 🙂 Works.

But after I beautifully waxed the cheese, (“wax on, Daniel-son!”) and posted a photo on Instagram, someone commented that if I vacuum seal the cheese in plastic to age it’s a better way to “keep an eye” on what’s going on in there. But this confused me because I was under the impression that the cheese needed to “breathe.” But they explained that the point of wax or vacuum seal was to “seal” the cheese and moisture in….

So, now I’m not sure what the best method is. Though upon further reading it seems that the wax does keep moisture in. I’m a little concerned about the first block of cheese since I did see some “weeping” on it before. I might delve inside it this week and see what’s going on and then re-dry and wax it. Not sure…

Sometimes being new at something is scary, but it’s learning through those unfamiliar scary things that makes your horizons bigger!