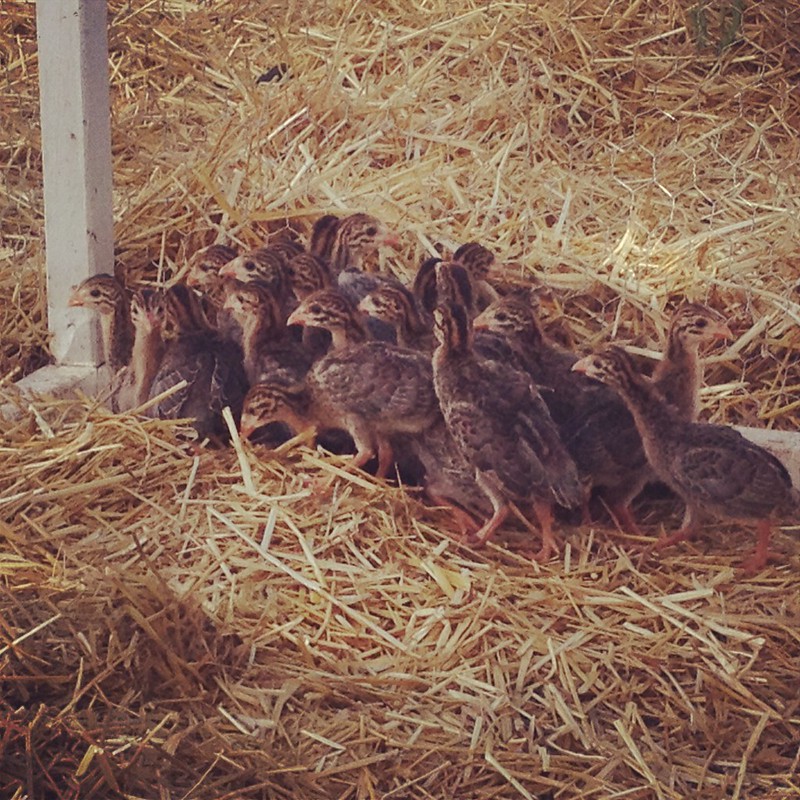 Even though I keep telling myself I’m done adding to the ranch till we get a few things better organized and more in control, I still came home the other week with a box full of peeping birds!!!

I’ve been reading up on Guinea Fowl since we found a good sized rattle snake in the ditch near the “bridge” where my kids like to play. No likey!!

I’d heard that Guineas were good “pest control” and also take care of small critters like snakes and mice. Nice! On top of which they act as “guard dogs” at least alerting the neighborhood to anything/one that is different in their environment. This to me is good because while Thor is starting to sound the alarm around our place, the other dog only barks at animals, never people. So at least with the combo of Thor and the Guineas I should know when someone is around. 😉 Ha!

This trait irritates some people though and the birds are quite vocal as I’ve already discovered, so maybe that was the reason someone was willing to sell me their 4 month old Guineas. 😉

What happened was that I put out an “IN SEARCH OF” post on craigslist, and had several people respond! The one offering me the 4 month old Guineas, and then no less than 5 people letting me know that a feed store, that I didn’t even know was there, had just gotten some Guinea Keets!! Yay!

So I took that trip 2.5 hours one way to the feed store and when I arrived and asked about the Guineas they said, “Oh yeah, she’ll make you a good deal on them.” The deal ended up being buy one get three FREE!! Ha! I guess they were ready to be done with Guineas. 😉

So I picked up 25 of them. Ten I traded to our neighbor for some hay, it’s so fun to do that!! And the others are growing quickly in the chicken tractor! They are fun to watch! Like chicks, but not so much. They are VERY fast and flit about in the tractor like little feathered bullets! They aren’t overly excited about people, but that’s natural. I just hope I can train them to come back to the coop when the time comes rather than roosting in the trees! They also aren’t too terribly bright at this young age anyway. When we came home late from our 4th of July fun we found them all huddled together in the corner of the tractor rather than in their little shelter. They are learning however, and finally made their way back in on their own after having to be “shooed” in the other evenings.

Looking forward to having these little pest patrollers in action as they grow! And hopefully the snakes will take note and go terrorize somewhere else!

Shared with The Prairie Homestead