This year our family started drinking vinegar. 🙂 Doth that groseth thee out? It did me too!

See, the first time I tried drinking vinegar I used the regular ol’ distilled kind you can find cheap in every grocery store. It. Was. Revolting!! I couldn’t make myself do it more than maybe twice. I tried to force myself because I’d been reading online about great health benefits of drinking the stuff. I even had some friends who’d had food allergies reversed after using it! But I decided the health itself wasn’t motivation enough to get past that awful taste.

Fast forward a couple years (yes that long) and I finally discovered/realized that it was Raw, Unfiltered ACV with “the Mother” that was what people were using to get the good stuff. I’m not going to turn this into a post about the benefits of ACV because there’s oodles of stuff online about that. If you google it you’ll be inundated with lots of info. Some is probably accurate, some probably not so much, and nearly all of it can’t be “proven” by a scientific/medical study… because there aren’t any. Still there is some data out there if that’s what you need to convince you so give it a shot! 🙂 I prefer to look at people’s personal experiences and especially people I know personally. So I’ll share a little story. A friend of mine had some pretty serious food allergies, as well as her little one, like shellfish and peanut butter. After going on an ACV regimen those allergies abated and they were able to again enjoy those foods!! And also my own dear Stuart has suffered from seasonal (??) allergies his whole life, only it’s all year not seasonally. Since starting to take some ACV regularly he’s been able to quit taking an allergy pill a day! And that’s pretty impressive in my book!

So besides our own health we’d read a lot about people giving ACV to their chickens and livestock for the same reasons. However it gets expensive to buy those little bottles of vinegar with the mother so I started reading about how to make your own. And it’s incredibly simple! You want to get some organic apples, peel and core them, eat the apples and save the peels and cores in a big jar. 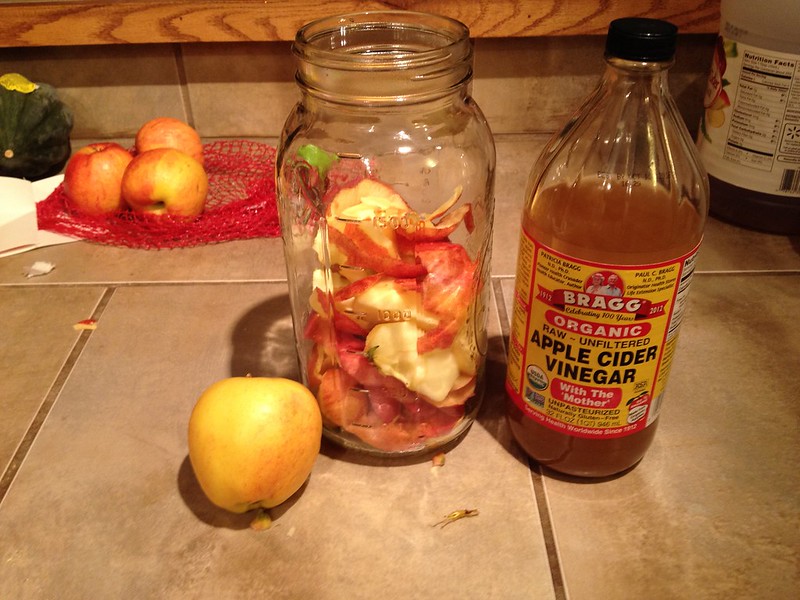 You’ll fill it with filtered or distilled water and add a couple table spoons of ACV with the mother in it, add .5 cup of sugar (non gmo kind!). Then cover and leave it alone for about a week. You want to leave it in a place that’s fairly warm.

After a few days, you’re going to start to smell this stuff ferment, and it’s not a pleasant smell in your kitchen. Which is why I’m waiting to do this again when it’s warmer and I can leave the jar in the garage or the mud room. 😉

After a week, you want to strain out the apple stuff. 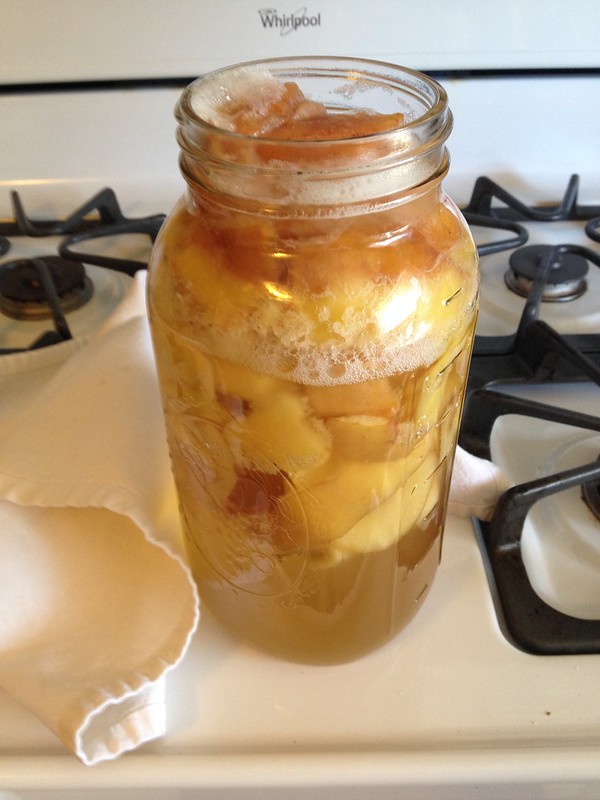 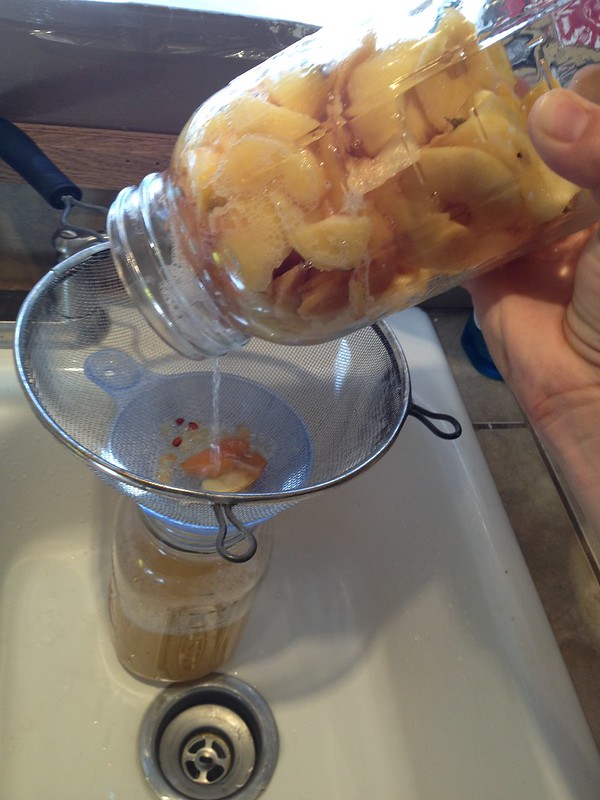 Feed the leftovers to your chickens, they’ll love it! 😉

You’re going to want to cover the strained liquid with a tea towel or some other breathable material for a couple weeks. It’ll grow a SCOBY which looks kind of like a slimy jellyfish thing floating on top. You can use it to start a new batch of vinegar as it is now “the mother.”

You’ll know when it’s done when it starts to smell/taste like vinegar. I’ll be honest, I didn’t really want to drink it myself. But I did use it for the critters and they like it a lot! Now that the weather has warmed up I’ll likely try another batch too because it can be pricy to buy, but it’s oh so good!! 🙂

Shared with the blog hop at Natural Living Mama.