The nesting box that our gals were using, I’m half ashamed to admit, was one that I kind of “concocted” out of some old house siding. Stuart has been ever amazed that the thing held together, because rather than build a frame (which is what he would have done) I just screwed the pieces of siding together. 😉 Yes, it was a challenge, but I didn’t know why it shouldn’t work. And it did! The “founding four” that were layers from our original flock liked it just fine and I didn’t see any need to change it up till recently when all the new chicks joined them in the coop.

The boxes I made were open on top and apparently just too irresistible to use as roosts for the young birds. Every evening I would find myself in the coop shooing birds off. Why not let them roost there, you may ask? Well, I’ll tell you. When birds wake up in the morning and leave their roosts there is usually a tell tale PILE of stuff to give away the fact that they were roosting there. I’m always amazed at how much they poo over night! Seriously!!! Aren’t they supposed to be sleeping?

So I decided to change things up. Because likely we’ll need more nests once the others start laying anyway, though if they are like our current layers they will all squawk at each other over ONE box! I got some old kitty litter containers and cut the tops. I wanted to make sure there was still a lip there to keep the shavings/straw in the box. I also found some small round buckets that I thought I’d give a go with too. Mostly I wanted them to be on top of the square buckets to provide a less desirable roosting place, but if they wanna use it then yay! 🙂 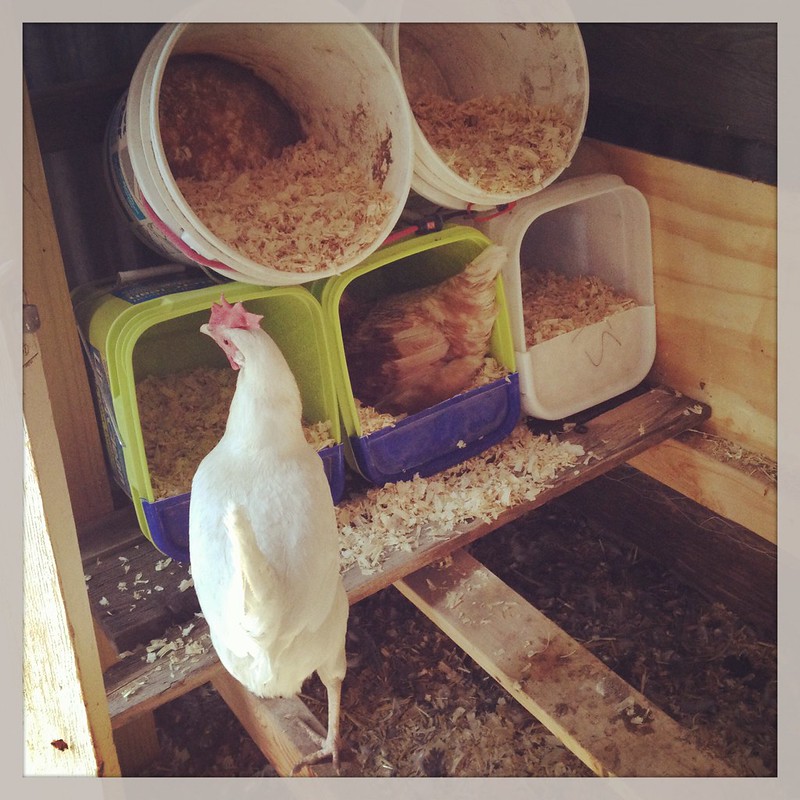 You can see the leghorn there is waiting for the one and ONLY desirable nest which is currently being occupied. 😉 It took them a little bit to decide this was a cool set up, and I was nervous that they were going to find a new place outside to lay, but all four have accepted the new arrangement and seem pleased enough. I’ve even found eggs in 2 of the five new nests so I take it that they can deal with that if they have to. 😉 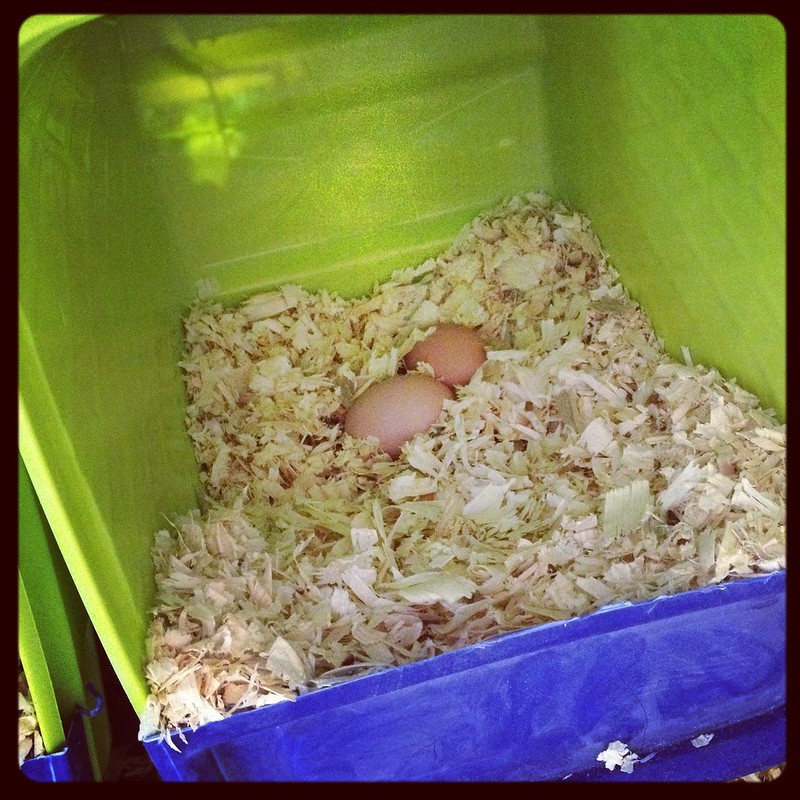 But as far as the little birds go, they still think they should be allowed to roost in the nests! Crazies!! There is plenty of other roosting options in the coop, believe me! For now I’ve been putting leftover chicken wire over the nests in the late afternoon to discourage anyone from trying to sleep there. It’s been more or less successful. This weekend I plan to build a “curtain” that I can staple to the coop and just drop down over the nests. I think it’ll be easier than what I’ve been doing and hopefully after a few weeks of foiled attempts to roost there, the pullets (and crazy Roo’s) will leave it alone. 😉

I’m still really looking forward to those colorful eggs!!! Should be in the next month or so! Yay!