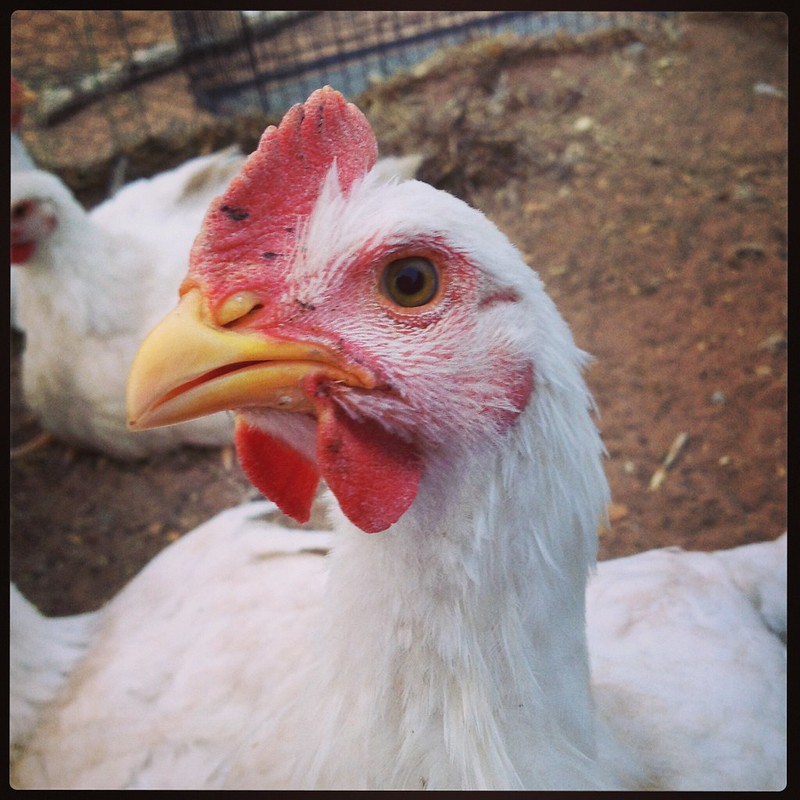 This weekend we processed our 13 CornishX chickens. It was a learning experience all around. A couple friends of ours came to help. They kept telling us they didn’t have “a lot” of experience, but it was still more than WE had so we were very thankful for their help! And the extra hands! It took us about 4 hours to do all the chickens, and it would have been an ALL DAY ordeal had it just been Stuart and me.

Here’s the “method” that we finally used. They (I say they because I never did this part!) would wring the chicken’s neck rather than chopping or slitting because it was less messy. Then immediately we would all start plucking feathers. Did you know that feathers will pluck easily for the first few minutes the after the chicken has died? I didn’t but now I do. 😉 We did this to avoid having to scald the birds (ugh, cant even imagine the smell!). We were planning to skin them anyway, but pulling the feathers first made that part easier too because you can actually see what you’re doing much better.

Then after they were mostly plucked the head came off and the chicken drained, it takes hardly any time because they were being hung upside down for the plucking part anyway.

After that we’d gut them. Which isn’t nearly as bad as you’d think if you’ve never done it. I’m not a hunter type so these chickens were my first experience with “guts” other than Thanksgiving turkeys. 😉 But it’s really not that bad. Obviously you want to be careful about puncturing some of the innards, but we only had one relatively mild bile incident. Did you know that bile is fluorescent green? I didn’t, but now I do.

Once the guts were gone, I saved the hearts and livers, I have no idea what a gizzard is so didn’t even bother looking for that 😉 we skinned the birds. I didn’t want the bother of trying to save the skin, and honestly, most people don’t eat the skin anyway, right? It peels pretty easily off of the breast and legs, but getting those little wings skinned was quite a challenge! I also saved all the feet to make stock with. 🙂

Ultimately we ended up with 13 skinned chickens in cold water in a cooler, and then we had a break for lunch. Believe it or not, we were all hungry! 😉

After that we washed the chickens again in the sink and bagged them in freezer bags. Right now they are hanging out in my fridge for a day or so and then they will go to the freezer. Did you know that you should leave meat in a fridge for a couple days before freezing so you don’t end up with really tough meat? I didn’t but now I do!

Over all the experience was fine. I did dream about chickens last night, but it wasn’t the stuff of nightmares. 😉 Once the chicken has been dispatched, and especially after most of the feathers are off, it just resembles a chicken you’d buy from the store and that makes handling it much easier. I never weighed any of the birds, but they were quite hefty!

A note on the Cornish Cross. We aren’t planning to get them again. Of course maybe we’re still too close to the event to make that decision fully, and we haven’t tasted them yet either, so that might make a difference. But we’ve been discussing just getting some heritage breed layers that are good duel purpose birds. And then we can get eggs from them, and should we want a chicken dinner we can dispatch them as needed rather than a bunch for the freezer all at once. That’s our thinking for now anyway.