A couple weeks ago we absolutely had to get the Cornish chicks into the chicken tractor as they were totally growing out of the water tank. Since it had been occupied by our layer chicks I had to just bite the bullet and put them in the coop run with the “big girls.” 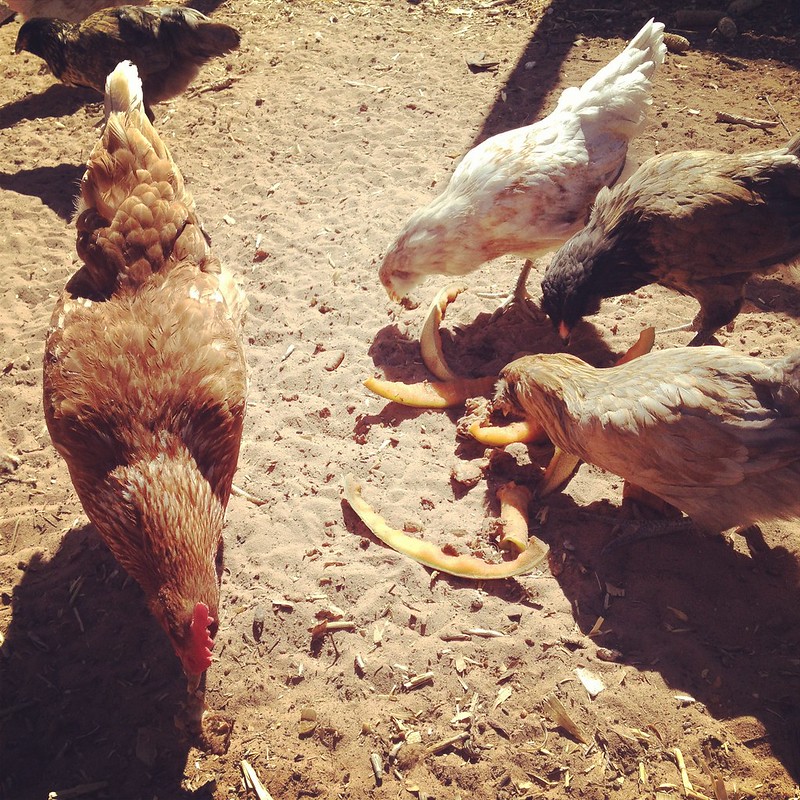 I was concerned because I knew from talking to a friend who’s had chickens that the old chickens don’t take to new additions very well. In fact they get down right ugly about it!

I wanted to integrate the young chicks slowly, but our coop set up is not conducive to that right now. Plus, I didn’t have the time. Which is not a good reason to rush things where livestock are concerned, but I honestly had no choice at THIS point! The point where I should have made a different choice was probably buying the meat birds right now. Live and learn. 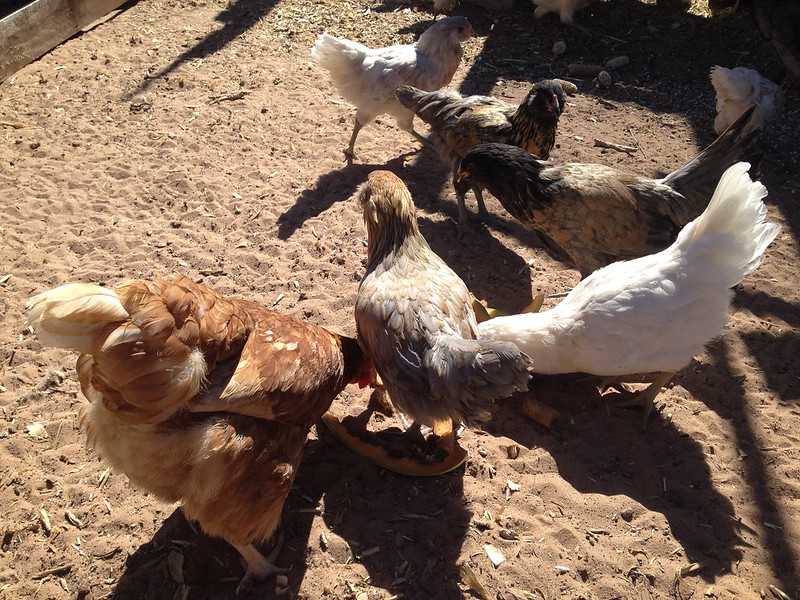 However, this time around it has all worked out, and I sigh relieved sighs to see that happen! I took the chicks down one afternoon, not even waiting till roosting time as some suggest. There was only one hen in the coop area at that time so I thought that was a good thing. The chicks have got the numbers on the big girls, so maybe that has played in their favor as well since it’s harder to pick on the same one all the time. The hens have for sure established themselves as the “boss” over the little ones, but no one is disputing that at this point. They will have to work on their new pecking order as time goes by and the chicks get a bit bigger. For now, it’s working out well and there haven’t been any significant injuries. I think one of the young Roos got some tail feathers broken or pulled the first day, but since then it’s all been okay.

The chicks are enjoying having more space, and lots of sand to dust bathe in and lounge in the sunshine. Look at them! 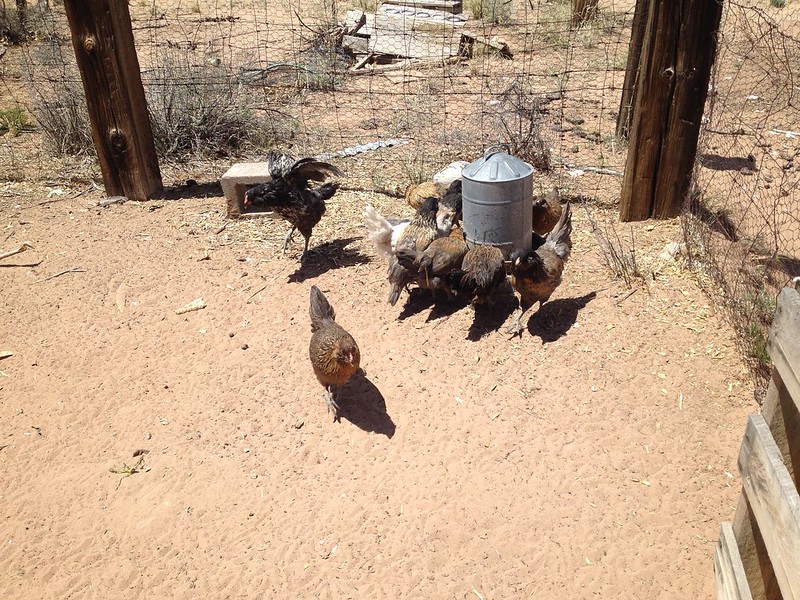 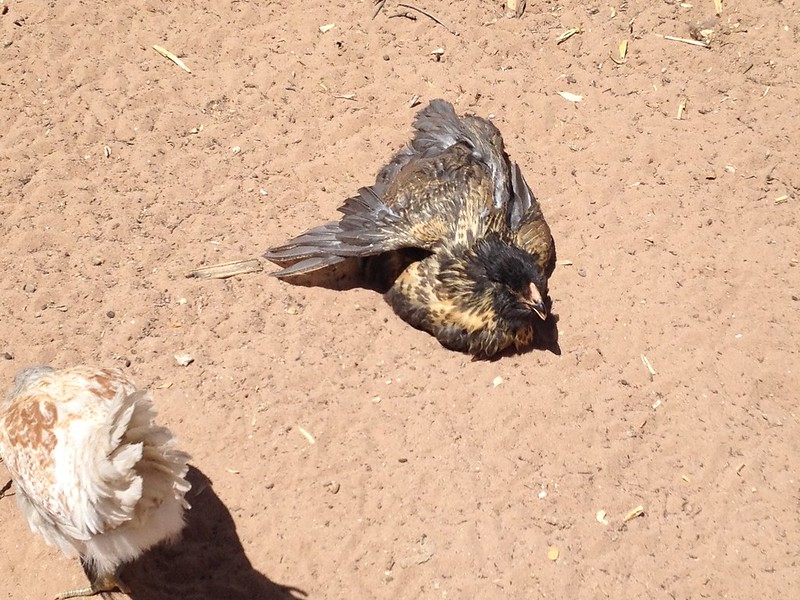 I try to spend some time down there each day just to make the chicks familiar with me. The hawk’s nest that I can see clearly still since the Cottonwood leaves aren’t out yet, makes me nervous, but hopefully the activity on the “farm” will keep them flying elsewhere for their meals.

Chickens are relaxing to be around… at least like this. When there are too many in a small space, not so much. 😉 So I’m happy that the transition went well and it’s one more step into regaining a little sanity in a very busy schedule these days. Can’t wait for those green and blue eggs!!! 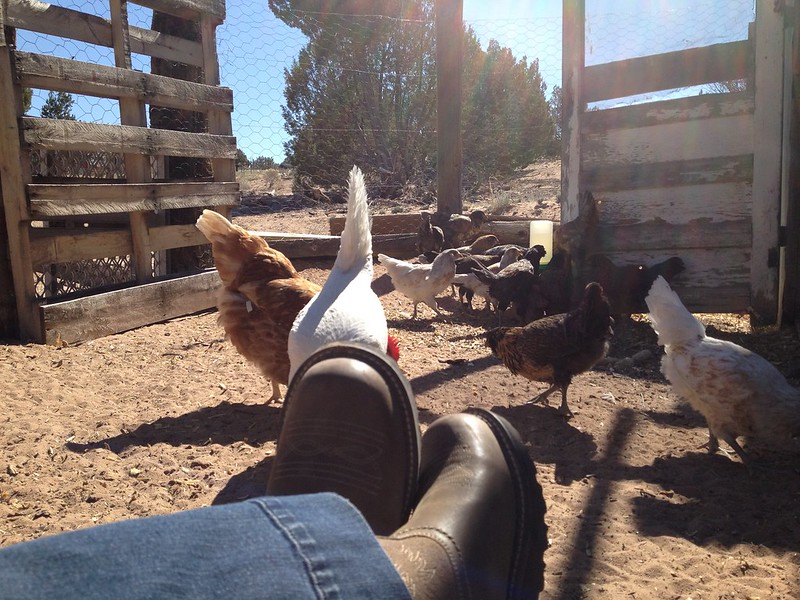