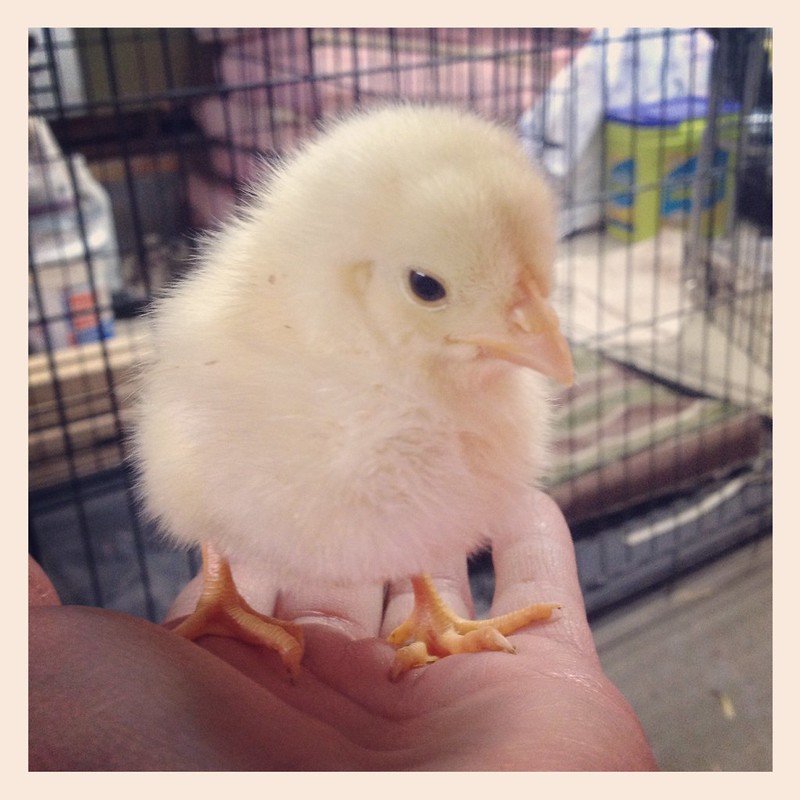 On our Facebook page, I introduced you to a lil chick I dubbed “Sunday Dinner” and his 14 pals. 🙂 Ya see… I have a condition. It’s called farmstead fever and it’s extremely serious. It completely disables a person, who looks relatively normal otherwise, from being able to walk out of a feed store that has small chicks without a box of them. 😉

I actually walked out of CAL Ranch with 2 boxes containing a total of 15 Cornish Broiler chicks. My thinking was that I had already been planning to raise a batch in the late summer/Fall and that they were being sold at the store for less than I’d have to pay from a hatchery with shipping, so…

That was my logic anyway…

What I didn’t consider was that these birds would grow fast and BIG and fast in a hurry! See, they look just like any other day old chicks starting out so a little tote with some wood chips works just fine… for a bit. 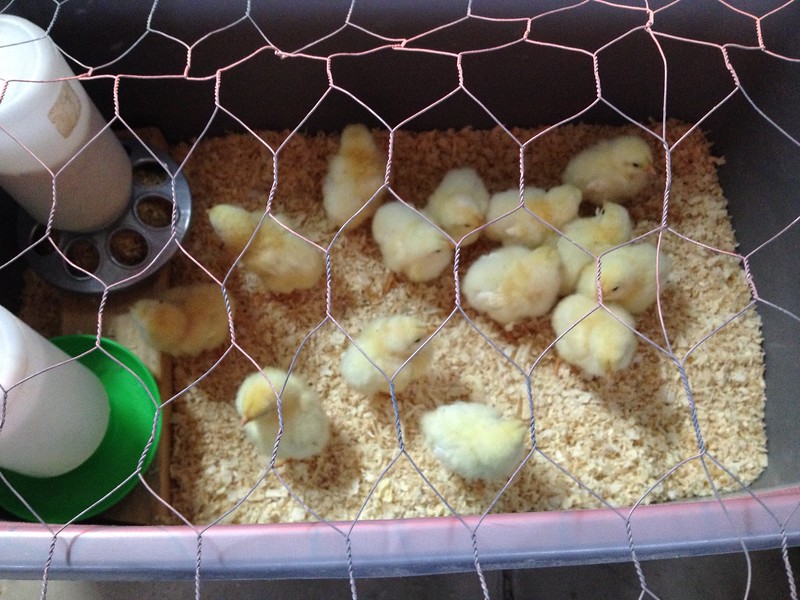 But it was a short bit. Plus I started to notice that broilers are not at all like other chicks and it was… disturbing! They just sat there. In fact if they could, they would position themselves so that they could just lie by the feeder and continue taking beakfulls without having to even stand up! Ugh! 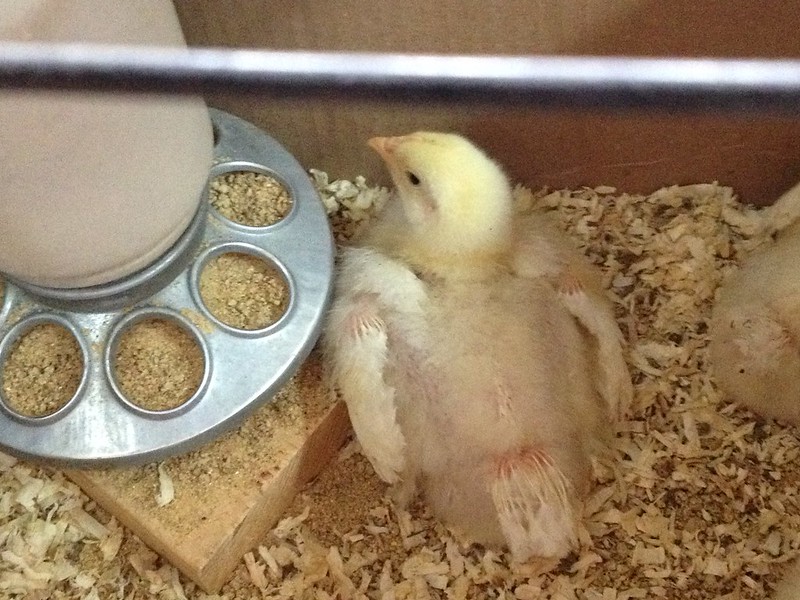 So I made them a duplex out of 2 largish boxes. My daughter said, “Now they have a living room and a dining room!” Guess which room was the most popular? I actually put the food and water containers as far away from each other as possible to encourage them to move! 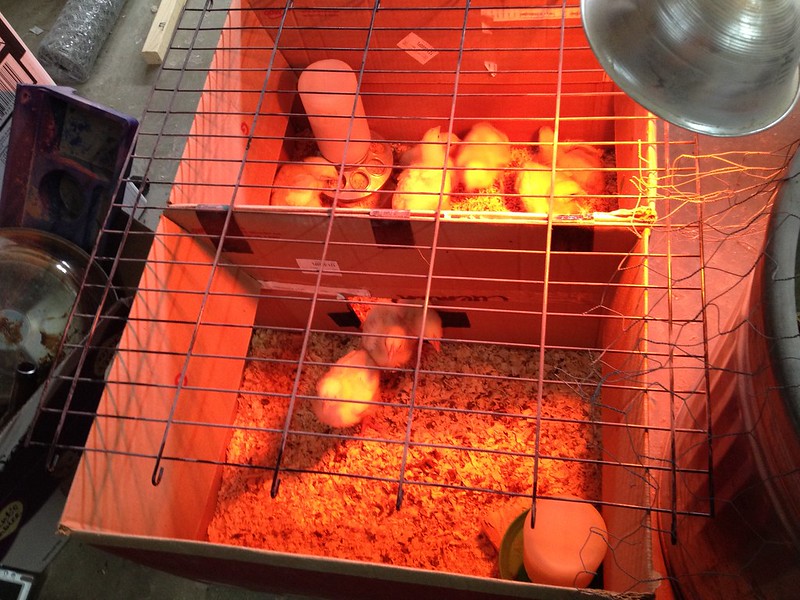 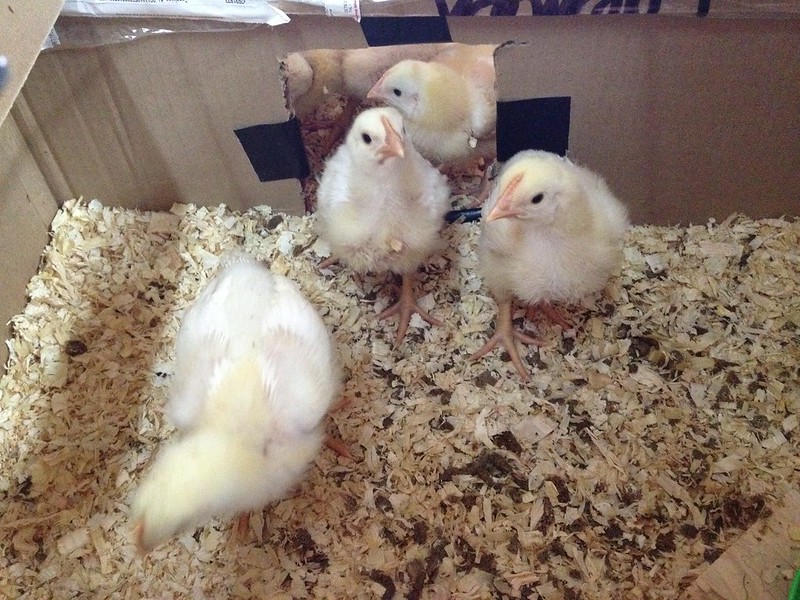 But they really quickly grew out of this space as well. However, I did some reading and decided that I needed to limit their food intake. See, with “regular” chicks, you want to keep food available always, but these uh… mutants, don’t seem to have the ability to NOT eat. So they just keep gorging until their growth is SO fast that their frames can’t support their own weight and then you have chickens dying of heart attacks and having broken legs all before they are 10 weeks old! Wow!

There’s actually quite a debate about whether or not people should raise these birds. They are the ones that are being raised in factory farms that everyone is in uproar about the horrible conditions. Obviously they were bred for the purpose of quick meat, and so the traits that have been bred into them are for those purposes. Amongst people who “homestead” some say that we shouldn’t raise them at all because they are such unnatural birds. Others say if you raise them humanely then it’s all fine. I’m not sure where I come down on the debate. Or if I’ll come down. We’re not done raising ours yet. However, I did notice that once they weren’t “stuffed” every moment of the day, they started to act more “chickeny” and less “sluggy.” So that’s good! They scratch and peck and MOVE, which I think is vital.

So they got moved to the water tank after the other chicks got an upgrade to the chicken tractor. 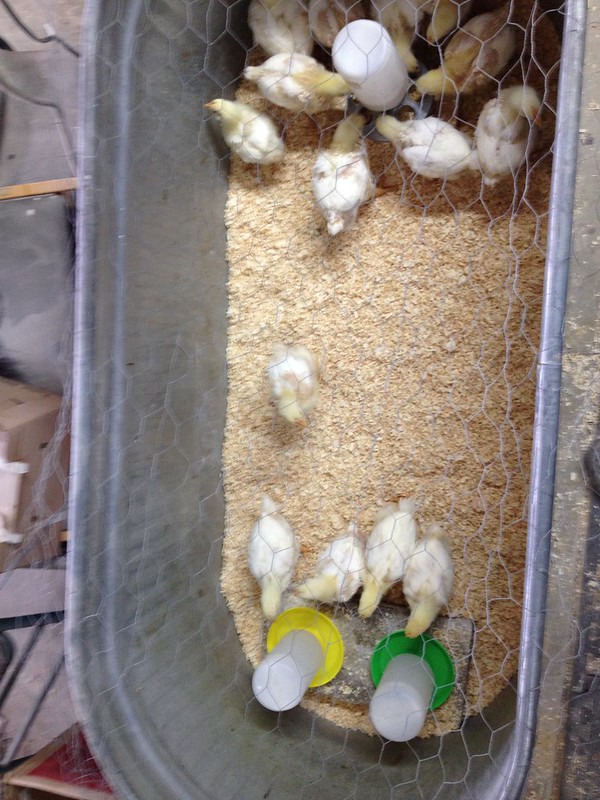 Our meat birds have lived out approximately half their life span now. It’s been an interesting experience all around for me knowing that I’m feeding, watering, cleaning up after, and moving these birds around trying to keep them strong and healthy because I’m going to slaughter them and put them in the freezer. It’s a different perspective for sure, and some of the feelings are hard to deal with. But I’m glad for the opportunity to go through this process. It helps me to appreciate things so much more to actually have a hand in it in this way.

The broilers have moved to the tractor since they were WAY too huge for that tank any more. The other chicks have had to “man up” and move in with the big-girls. Everyone on the ranch has to be flexible and make adjustments. 🙂 The broilers are enjoying outside just like the other chicks did. They peck and scratch and eat and poop and enjoy the sunshine. 🙂 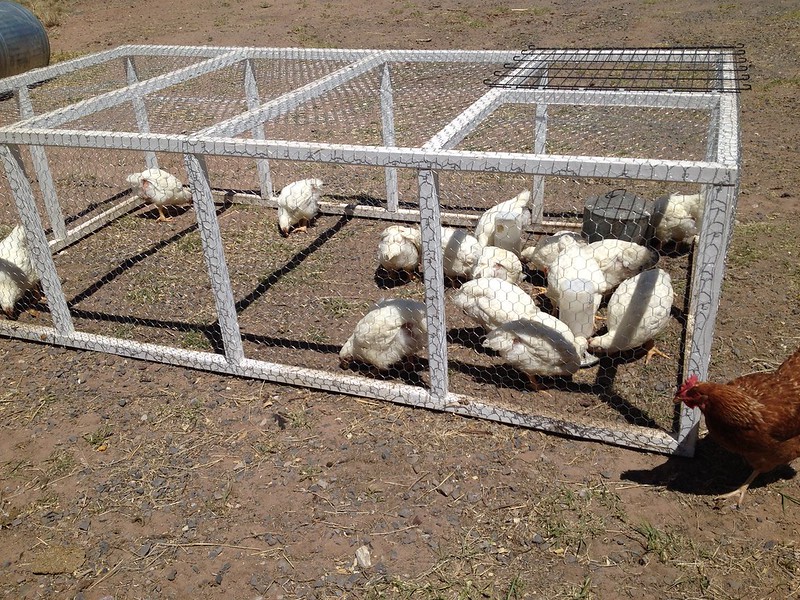 I do have to admit that these birds are the thing I have liked raising least. Chickens (birds at all for that matter) are pretty dirty things. Even the layers create so much dust in such a short time with all their scratching and flapping that the ENTIRE garage is covered in a layer of this fine dust. Unreal! But the Cornish are rather revolting too. They don’t keep themselves very clean, unlike other chicks who spend a lot of time preening. Their droppings are VERY VERY gross, liquidy and stinky! And since they eat so much, there’s a TON of it! They are just filthy eating and pooing machines. And while I feel a little bad being so disgusted by them, they are so “unnatural” for lack of a better word, that it’s repulsive. So… I want good meat for our freezer, this type of bird is the fastest way to make that happen, so that’s what we’re doing. 🙂 If this “crop” of birds is a success (and I won’t know till they are IN my freezer) then I’ll likely do it again. But I hope to read up even more on them and see what others have done successfully in pasturing the birds. Maybe get a movable paddock that I can keep them in, so that I don’t have to be up close and personal with the icky aspects of these critters.

Shared with the Blog Hop over at The Homesteading Hippy. 🙂