The Angle I Didn’t Anticipate

Last weekend I took a little trip and came home with a little bundle of fluffy white fur! His name is Thor and he is absolutely adorable!! 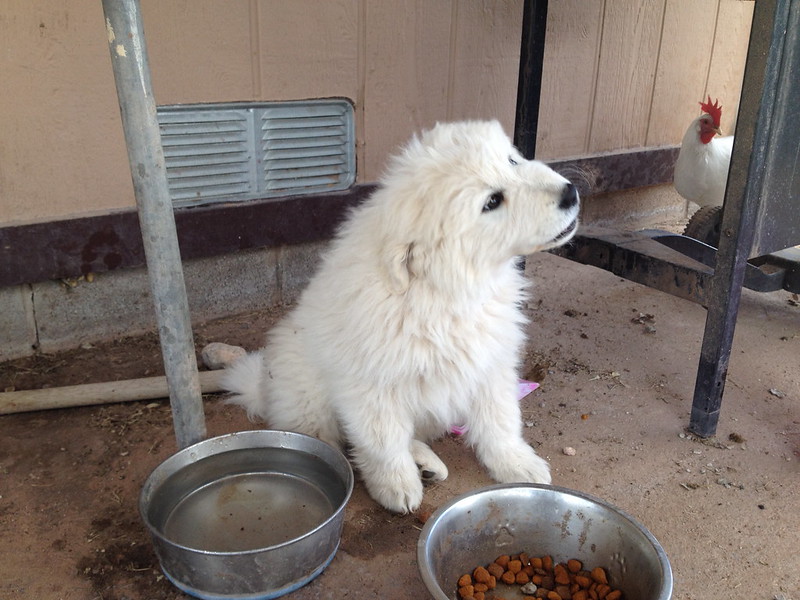 I have, of course, been devouring everything I could find online about these dogs and doing right by training them to be good livestock guardians. Most everyone says that the dogs need to spend as much time with the stock as possible from the earliest age. So my plan, kinda, was to stick the pup in the barn with the goats at night when the baby goats were penned up. Because I was afraid that his puppy antics might actually be dangerous for the babies.

There were a couple things that happened to throw a kink in the works of this plan. One was Polly deciding to have her twins a couple days early and therefore there were infant babies in the barn, and I for sure didn’t want a puppy around them.

But secondly was the angle that I didn’t anticipate (for some weird reason) and that is that the Does were not willing to welcome a puppy into their herd with open arms. Oh no!

In fact the day after Thor’s arrival I took him up to the LRB to meet the ‘family’ and after one look at him, the mommies made this weird snorting sound and vacated the barn with all the fur on their backs standing straight up. Clearly this ball of fluff was quite the threat. 😉 They stood just outside the door the entire time I was up there with the puppy making those snorting noises and occasionally lowering their heads to warn him off. He wasn’t going anywhere near them either. This was going to be a problem…

My solution is to take him up there for a few hours each day and put him in the crate that we use for the kid-stall so that he is safe but still near them. The first time I hung out up there with him. This is what the goats all did for the longest time. 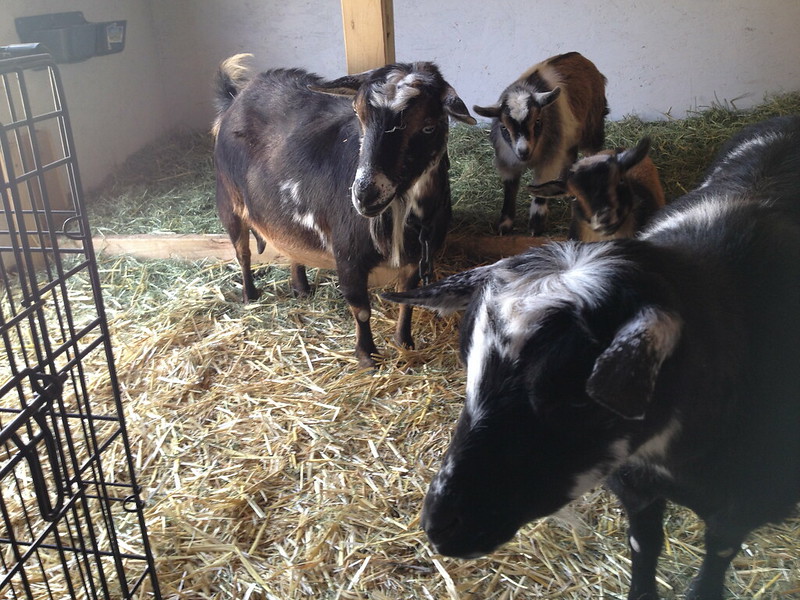 Polly’s babies like to nap under the hay feeder, so they were the closest to the dog and hence she stood their like a sentinel, ears pricked, waiting for little fur-baby to attack. Ha ha ha!! Silly creatures! 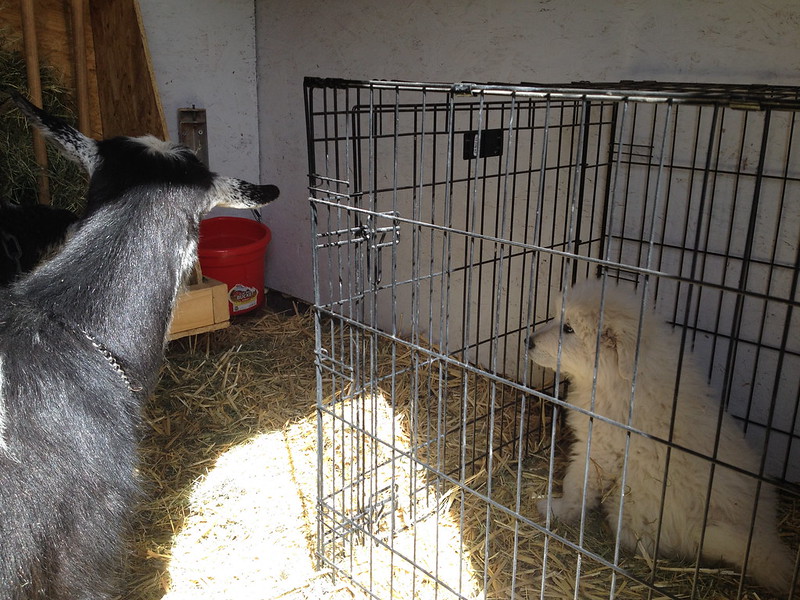 Eventually though they all relaxed a bit and went back to normal behavior, eating and chewing. 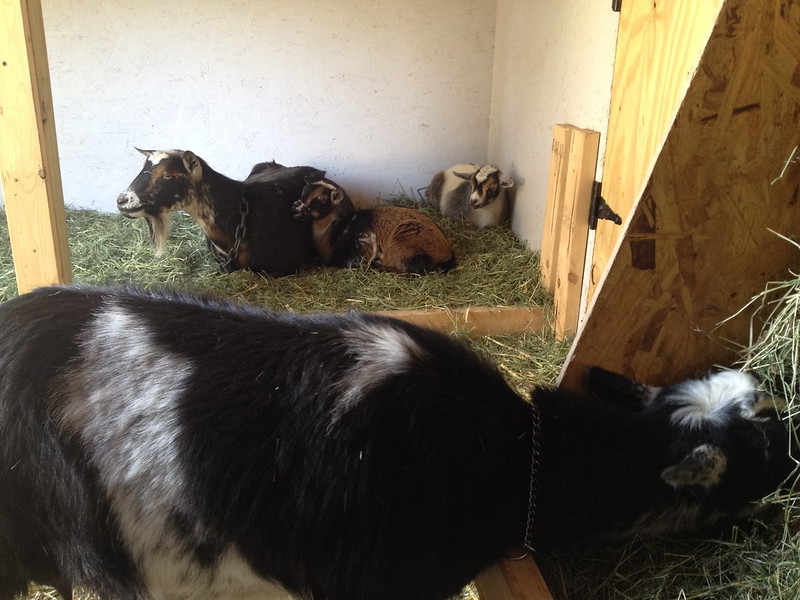 I did this a couple of days just to make sure that they were able to be somewhat relaxed with the puppy there before I’d just leave him in the crate. He copes, though this sad little look was what he gave me the first time. 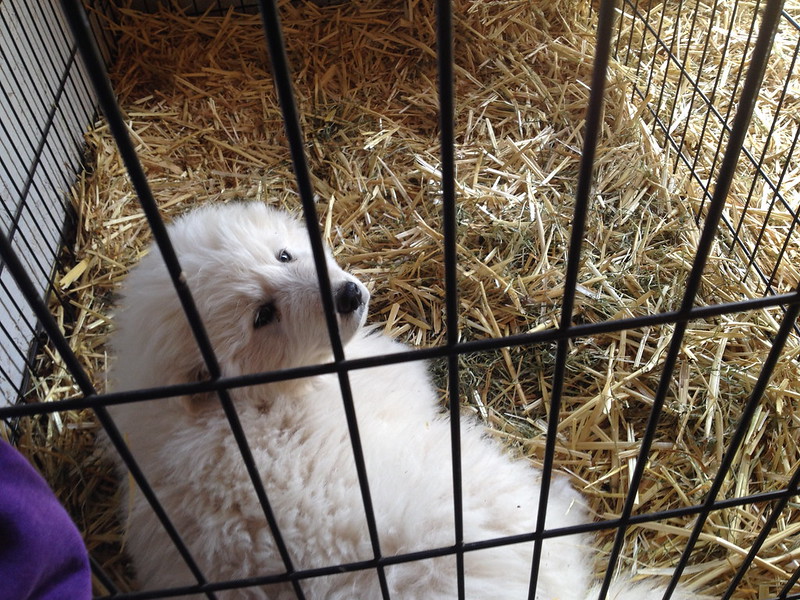 Awww, poor guy! He relaxes pretty quickly up there now that he know’s he’s safe from getting pummeled by Polka, and usually just takes a nap. Aww, cute widdle puppy! 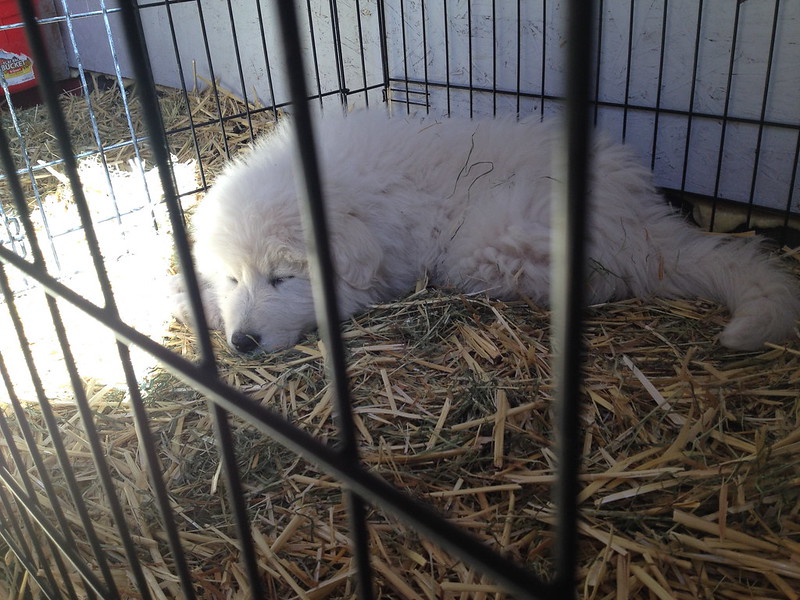 The first couple of times Thor had crate-time at the LRB Polka and Polly would charge the crate, not actually hitting it, but making a definite show of “we’re not happy with your presence.” 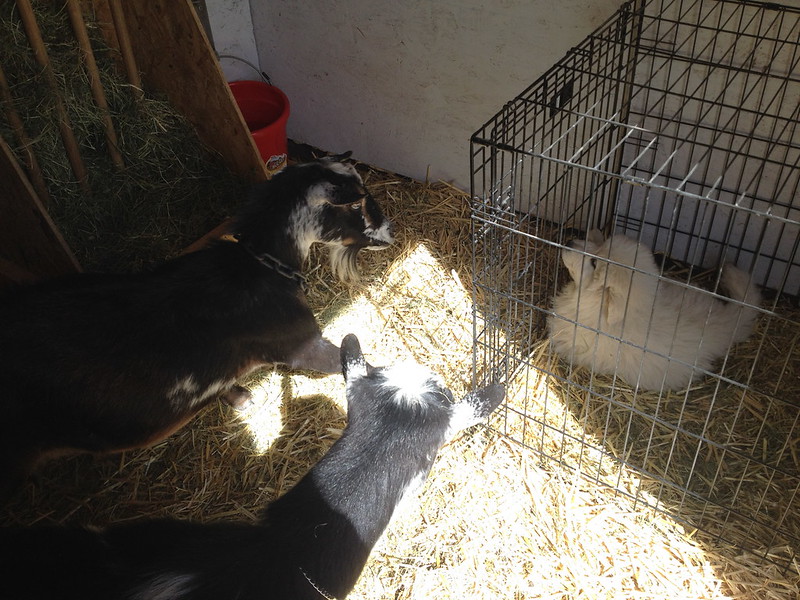 He’s been butted a couple of times, however, so he has a pretty good respect for the goats and keeps his distance, even when out of the crate. I have a better respect for their hard heads too since my leg got between Polka and the puppy one time when she was trying to butt him. Lemme just say… Ouch! Yeah, that spot still hurts actually. For some reason she seems to feel that she has a personal vendetta against Thor, and will actually seek him out just for the purpose of butting him. I don’t get it. She’s just being a bully for the sake of it! So most of the time if he’s out of the crate, I get between the two of them because she knows I’m “the boss” and she won’t charge him, but I’m starting to get annoyed with her attitude and that’s a fact. It would be a different story if he were irritating her kids or something, but he is doing his level best to stay out of her way.

So… we have work to do. I’d like to get some sort of temporary pen put up next to the goat yard so that Thor can stay up there full-time and they can all “jell.” Hopefully that will happen soon. In the meantime Stuart built an awesome dog house for Thor! It looks like a mini LRB! 😉