I found a post in my internet wanderings one day about homemade ginger ale. This intrigued me because one of my favorite sodas in times past was Vernor’s Ginger Soda. It was hard to find but when I did it was yummy! 🙂 Now I know that most ginger sodas don’t even contain real ginger. Hmmm…. well, moving on then.

We don’t normally drink soda in our house anyway. It’s one of the first things we started cutting out when we decided to ditch processed foods. And it’s kind of a no-brainer anyway. Full of sugar (GMO) full of high fructose corn syrup (also GMO) full of chemicals, (ick) and empty calories, yep. So except for when I was pregnant, then the rules changed and I simply HAD to have a leeetile bit of Coke every day, we don’t drink it. Oh and birthday punch usually has a lemon/lime soda mixed with the juice just for something special that the kids look forward to.

But the idea of making my own ginger ale and root beer piqued my interest. If it uses real ingredients, and can still be bubbly, and bonus has good bacteria for you, then I’m all over that!

So this post on raising your own “ginger bug.” Got me started and here’s what I did. Pretty much followed the directions. 😉

Yes, we are going to transform this inappropriate looking root into something magical! 😉 By the way, this was the first time I ever bought fresh ginger, and I was surprised how affordable it is! I’m now on a quest to find more recipes that use fresh ginger! 😉 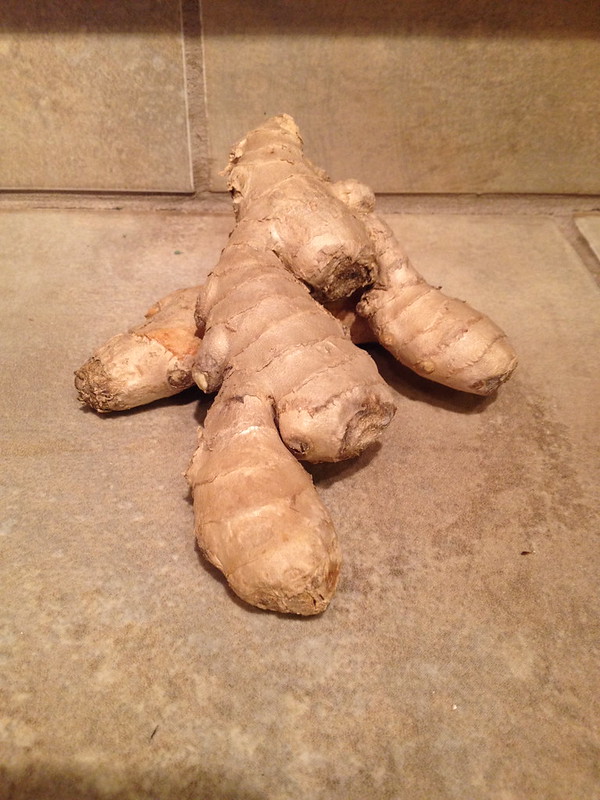 First I peeled and grated about 2 inches of ginger root to get approximately a couple tablespoons of grated ginger. Flop it in a quart sized mason jar. This one used to contain pasta sauce, but now is the ginger bug headquarters! Add 2-3 tablespoons of sugar. You should use organic sugar <- this is the one I use because I can usually find it anywhere) just so you know you're not putting icky GMO stuff in your bug. Sugar in... 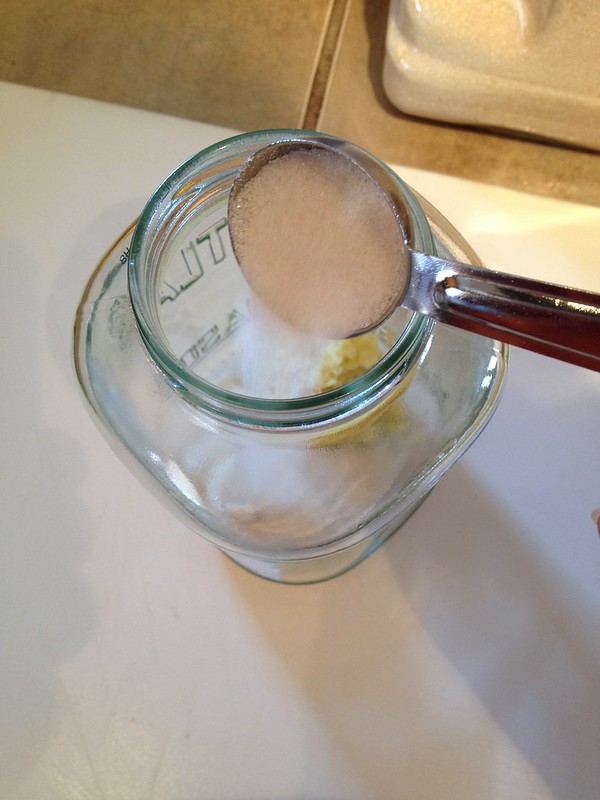 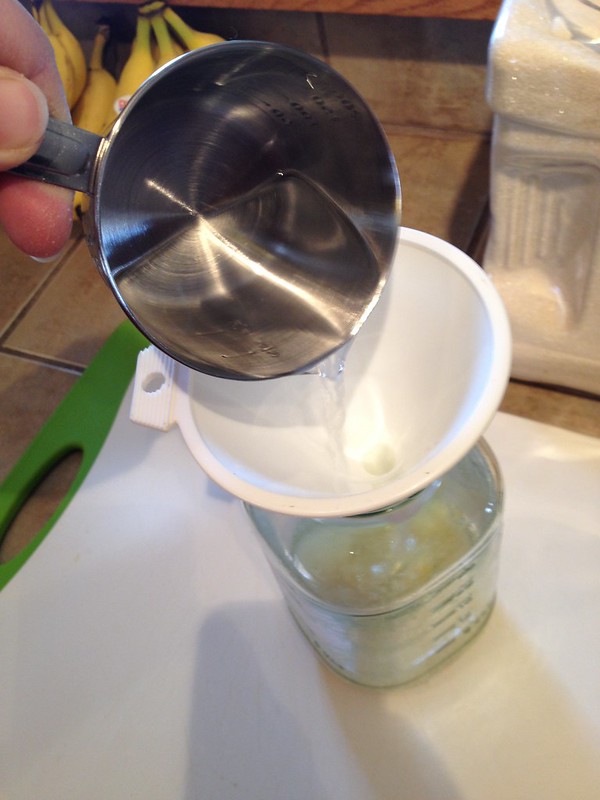 Give it all a good stir with a non-metal spoon, was what I read, and the only non-metal spoons I had were the kid’s plastic IKEA spoons. 😉 Use whatcha got, right? Swirly swirly ginger and sugar water! Smells awesome, but don’t give in to the temptation to lick it! Ginger is HOT!!! Wowsers! Ask me how I know. 😉 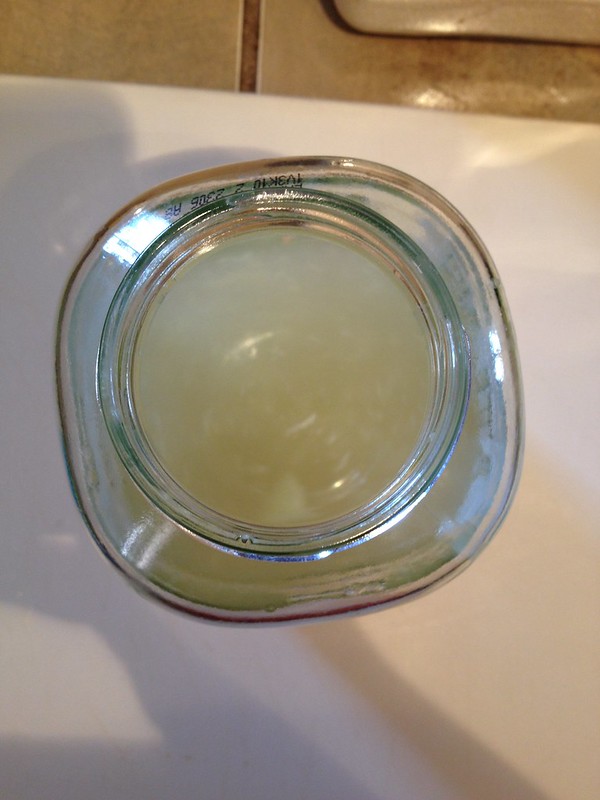 Then you want to cover it with a tea towel or a coffee filter or something that will “breathe” but not let icky things in. This was what I came up with. Let it set out on the counter or top of the fridge, my personal favorite place for it, for about a week. Each day you feed your “bug” a tablespoon of ginger and a tablespoon of sugar. After a couple/few days you should start to hear that familiar “hiss” of the bubbles when you stir it. And after 5-7 days it’s ready to use in ginger ale which is what I’m going to do next!!

Here is the fizzy ginger bug on about day 3. 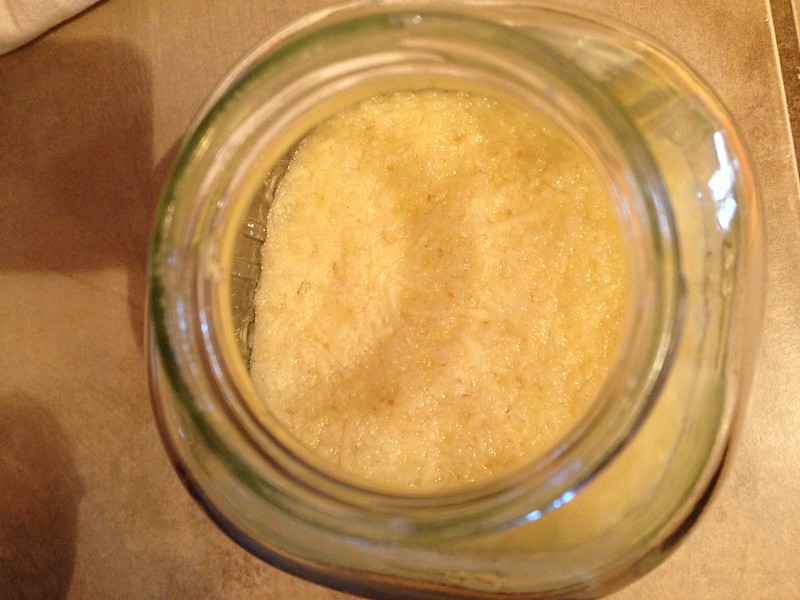 Confession time. Mine hissed nicely after about 3 days and then I didn’t feed it on time for a day and all the hiss went away. 🙁 So I’ve added a bit more sugar and a bit more ginger hoping to bring it back to life. However, a spontaneous trip away with my Hurb interrupted the process once again, so rather than leave it out to it’s own devices I capped it and put it in the fridge till I can get back and doctor it. This is my first attempt with this kind of starter so if it doesn’t come back after a few days I’ll chuck it and start again. Which will kinda be a bummer since I really want to try the ale and I got some cool bottles for it and everything! 😉

Also, my son wanted to know where exactly in that jar the ‘bug’ was, and what it ate. 😉

After the initial brewing time, you can keep your bug on the counter and feed it daily with 1 teaspoon ginger and 1 teaspoon sugar, or keep it covered in the fridge and feed it weekly one tablespoon of each. You’ll also want to replace the water as you use the starter for your recipes. 🙂